TuneIn, the online radio service that just raised $16 million from an impressive group of Silicon Valley venture capital firms, quietly amassed over 40 million monthly active listeners over the last few years. Lately, however, the company has been starting to make a bit more noise about its success while also consistently adding new features to its service. Today, for example, TuneIn announced that its users can now enable automatic Facebook sharing for whenever they tune to a station or favorite a station or song. 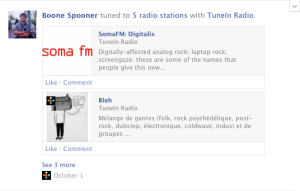 TuneIn is obviously relatively late to the party here, but as the company’s head of product Kristin George told me earlier today, TuneIn’s focus was to ensure that the new feature wouldn’t violate the users’ trust in the service. TuneIn actually started working on this shortly after Facebook announced its seamless sharing feature, but the company decided not to rush this out of the door. “We want to do things a bit differently,” as George told me.

Interestingly, the company doesn’t actually look at Facebook as a driver for growth but as a way to improve discoverability for its existing users. With 40 million monthly actives, George noted, growth isn’t currently TuneIn’s greatest concern. Instead, the company hopes to re-engage its existing user base with this feature, she said. TuneIn wants to use this feature to help its users figure out what is live and happening on the service (and the radio stations it indexes) right now, she added.

The seamless sharing feature is only available on the service’s website. It will come to TuneIn’s mobile apps – which are actually driving most of the company’s growth – in the near future. Mobile Facebook users, however, will already be taken right to the mobile app when they click on a scrobbled link in their news feeds.

Just yesterday, about 240,000 people used the service to listen to the U.S. Presidential debate and soon, TuneIn will stream all Major League Baseball post-season games live on its service. For events like this, the Facebook sharing tool will surely drive many additional listeners to the service from Facebook.

For the time being, the sharing feature is mostly a one-way street from TuneIn to Facebook. The company, however, is obviously also thinking about how it can improve social discovery on its own site and in its mobile apps by using Facebook, as well.