The proliferation of smartphones has made it incredibly easy for us to take numerous photos and record videos, but it has also left us to deal with massive media archives stored on our devices. When you need to locate one specific photo, or find those you shot at a given event, it can be difficult. A new mobile application called Flayvr, aims to help with this by automatically organizing photos and videos into collections, titling them appropriately, and offering tools for quick, one-click sharing to social networks.

The company, based in Tel Aviv, has also just closed on a seed round of $450,000 from Israeli angel investors.

According to co-founder and CEO Ron Levy, he was inspired to create the service because it was something he needed himself. “I was walking around a lot with my kids –  I try to spend as much time with them as possible – and I experiencing these precious moments that only when you’re a parent you experience for the first time,” he explains. “I found myself trying to capture these moments with my iPhone…but when I tried to remember them, revisit them and experience them again, I found myself stuck in these endless camera rolls,” he says.

Now, to be fair, Flayvr is not the first app organize or try to make sense of your photo collection for you. We’ve covered others in the past like Everpix, Keepsy, Snapjoy, and Batch to name just a few. (As always in a crowded space, that’s a representative list, not a comprehensive one.) A search in the Apple App Store will show you this is a popular pain point which developers are trying to solve via apps, despite Apple’s support for Albums and Photostreams on iOS. 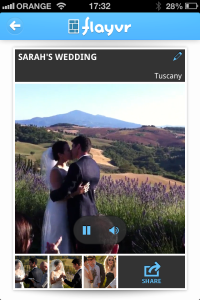 If anything, Flayvr reminds me the most of two newer and fairly similar apps for creating shared albums, Flock and Moment.me. Both group your photos (and in Moment.me’s case, videos) into collections which are created automatically. But both are also focused on using geo-location to group photos taken in one location with those from your friends. In other words: shared photo albums. Flayvr, meanwhile, is focused primarily on grouping photos for your own benefit and ease-of-access.

If you want to let your friends see your grouped photos (the albums Flayvr creates are private by default), you can tap to share the collection as an HTML5 webpage whose link can be posted to either Facebook, Twitter, Google+, or sent out via email or text. This is also a useful way to share a large number photos privately with other individuals, given that iOS limits you to five per email. That also puts Flayvr in competition with other apps like Popset, Kicksend, and others. Yes, a very crowded space! 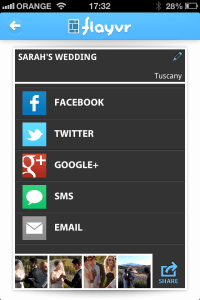 In the end, it comes down to execution. It’s not a zero sum game, either, so your personal preferences will come into play. That being said, the Flayvr interface is fairly slick. Setup is fast and painless – you just give the app permission to access your camera roll and calendar, and it automatically creates your collections, titling them by date taken and adding in the location (city), if geo-tagged. I’d love if locations could be even more specific, like “home” or “Disney World,” for example, but it’s a good start. The calendar integration goofs up sometimes, however. I have a recurring reminder on my calendar, so Flayvr tagged the photos taken during the time the reminder is scheduled with the alert’s title. So if you use your calendar as your mental to-do list (“pay bills,” e.g.), you could be in trouble here. Still, a minor quibble.

In the future, Flayvr may introduce additional editing capabilities and social features, allowing users to follow others on the service, as opposed to just posting to social networks, which could move it into closer competition with Flock and Moment.me, perhaps.

The app, which launches today, is a free download here in iTunes. An Android version will arrive in a few months.