Yandex today is doubling down in its ongoing battle to make sure that Google doesn’t eat away its market share in Russia, with the launch of two products that aim directly at some of Google’s strongest touchpoints with consumers (and the wider ecosystem of developers). Yandex today is launching its own Internet browser, and it is also launching its first app store — with the former targeting desktop users and the latter a move to extend its position in the mobile market.

The company says that both are being rolled out first in Russia, with the intention to then take them to other markets where Yandex operates, such as Turkey and other CIS republics — and then take them worldwide. “We see Google pushing into the Russian market and we have to answer symmetrically,” a Yandex insider told me. “We launched our own browser that is available in Russia now, but it will also be a product for the rest of CIS, Turkey and the World soon.”

The move to offer more products beyond search is an essential move for Yandex, not only to remain competitive against companies in its home market like Google and Mail.ru — which last week launched its Amigo “social browser” — but to also continue building out its business. Although Yandex currently has just over 60% of all searches in Russia, that share has declined over the years and so it will need to look at other avenues, and other geographies, to bolster its business.

The product announcements follow news from two weeks ago, in which Yandex was revealed to be the mapping partner for Apple in Russia — providing listings info and other data at a time when Apple has been scrambling in other markets to provide a comprehensive and reliable Maps app to rival the experience that users had when Apple had been partnered with Google for its native mapping app.

Yandex for now is still dominant enough in search that even on Google’s Chrome in Russia, it dominates searches, according to statistics from Live Internet. That’s saying quite a bit, considering that Google is the default search in Chrome and changing that requires more than just a click. It is also the top search engine for those using the Firefox browser in Russia.

The internet browser being launched today is only for desktop users, although it seems like it will only be a matter of time before Yandex brings it to mobile devices as well. Yandex is already offering users a suite of products online beyond search — not just maps, but also a cloud storage solution (Yandex.Drive), music streaming services (Yandex.Music), and email, and much of this has also been built for multiscreen (desktop/mobile/tablet) use.

As it is with Google, Yandex’s intention is to sell search and display advertising against all of this.

Just as you get in Chrome, the search and browsing window is merged — but where it differs from Chrome is that users can easily change their search providers (going even to Google if they want). The reason, perhaps, that Yandex is less tied to people sticking with its search engine is because it has integrated so many other Yandex services in with the browser: they include current traffic or weather conditions, in real time, directly in the browser interface. (See screenshot below.)

And in a concession to its core audience of users who speak primarily Russian and other languages that are not English, the browser uses machine-learning technology to help intuit results for users that are relevant even if the user cannot search in the languages needed to find those results in the first place. Yandex is also using Kaspersky technology to screen and warn users of malicious websites.

“Cloud-based browsing is a next-generation answer to the challenges of the modern internet,” said Arkady Volozh, CEO of Yandex, in a statement. “To make the Internet experience faster, easier and safer for everyone, we have built a cloud-based browser that integrates the best of our products and services and is open to other web developers.”

The web browser is built on WebKit, and the user interface is based on Chromium — meaning that developers can easily build apps and extensions to work with the browser as well.

The developer push is also being highlighted through Yandex’s mobile app store announcement too.

This Android-focused store, which is launching in the next couple of weeks, is another move by Yandex to further its reach on mobile devices. TechCrunch understands that it will be launching with a number of applications out of the box from Yandex itself (Search, Mail, Disk, and some different geolocation apps), as well as those developed by third parties — 40,000 at all from launch. Yandex is able to do this because it’s developing it with Opera Mobile, which has its own app storefront and is also working with third-parties on white-label services.

As with Amazon’s app store, Yandex’s effort appears to be aimed squarely at those handset makers that are working with forked versions of Android, and therefore cannot offer Google’s Play storefront. As with China, Russia is shaping up to be a strong market for these companies, and Yandex tells me that there are at least three handset makers — Pocketbook, texet and 3Q — that will be shipping devices preloaded with Yandex’s app store.

Similar to other app storefronts, Yandex is splitting revenues 70/30.

And interestingly, Yandex says that it is also taking its app store white-label to carriers, with MegaFon preparing now to launch its own Yandex-powered app store.

Although Yandex has stopped short of looking at a mobile operating system of its own, these moves to put it ever closer to that happening, too. A Yandex spokesperson declined to comment on that question. 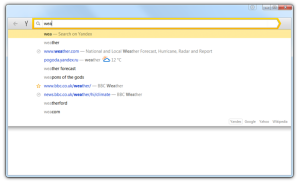