Sharethrough CEO Dan Greenberg has been talking up the benefits of native advertising for a while now — often on this very site. Naturally, Sharethrough has been offering services around native video ads, but now it’s announcing Sharethrough Sponsored Videos, a platform that Greenberg says should make the format viable for a much broader group of publishers and advertisers.

When Greenberg talks about “native” ads, he means ads that don’t look like your traditional banners, and instead like an organic part of the website. They need to be clearly marked as advertising, but when a reader/viewer looks at them, the ads should register as another type of content, rather than some random crap they can ignore.

So Sharethrough allows publishers to incorporate sponsored videos in three standard layouts — the feed, the gallery, and the grid. In each case, the video should appear as just another piece of content, with a little indicator that it’s an ad.For example, if we added the sponsored video unit to TechCrunch (this is just hypothetical), it could show up as just another post in the feed, or maybe one of the links in the four featured stories at the top of the page. 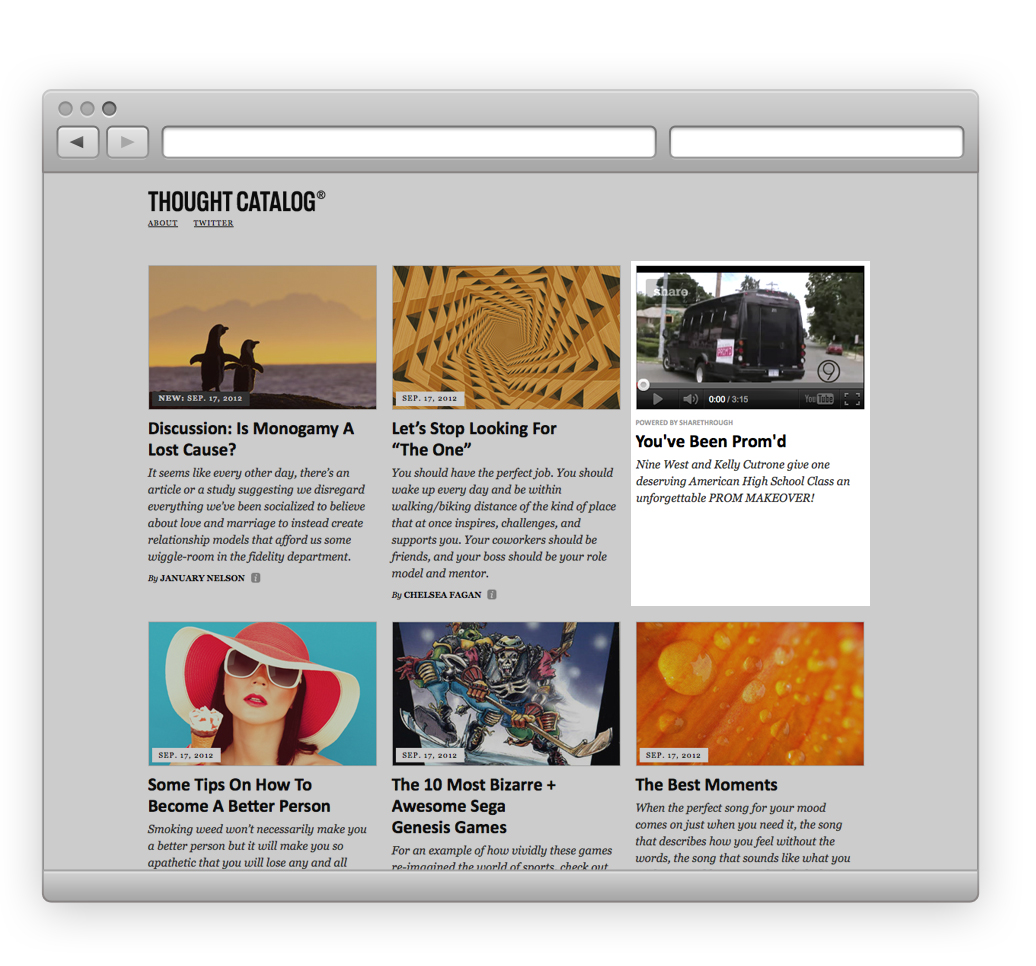 Again, Sharethrough (and others) were already offering these types of ads, but Greenberg says the company is now standardizing the process. Without the platform, an advertiser would have to contact the publishers directly, and then the publisher would have to deal with the headache of manually inserting the video into the right spot on the page. Now, advertisers can place their ads with a number of publishers, and publishers can just slide those ads into the placements that they’ve already created. The process still requires some “white glove” management from Sharethrough (for example, the company works with publishers to determine where the native ad unit should be placed and how it should be formatted), but Greenberg is hoping to completely automate the process in time.

Publishers can also include custom text and images for each ad. So even though advertisers get the scale of an ad network, to the viewer each placement should look like it was custom-built.

The Awl Network, Forbes, Thought Catalog are already on the platform, Sharethrough says. (You can see a screenshot of the Thought Catalog usage above, and a video of Forbes discussing the ads below.)

Greenberg argues that this benefits viewers, too, because it makes publishers less willing to tolerate crappy ads. If you’ve got a weird weight loss banner, but it’s pushed off to the side of your website, that may not seem like a big deal, because your readers can ignore it. On the other hand, if it’s there’s weird weight loss video in your main content stream, then you’re probably not going to put up with it.

Greenberg adds he’s “definitely bullish” about mobile (even though he’s not ready to make any specific product announcements), because there’s less room for random banners, and so native ads should make even more sense.