Rupert Murdoch’s News Corp. is planning once again to let stories from its paywalled UK newspaper The Times get indexed by the search giant Google. This reverses a two-year-old policy in which News Corp.’s UK newspaper division, News International, dramatically yanked stories from Google as it prepared a paywall to better monetize that content and do away with low-value single-story visitors from sites like Google. This effectively means that News Corp. (and Murdoch) have conceded partial defeat, accepting that it needs the search engine traffic to keep growth on the sites from stalling.

The UK’s Telegraph first reported the change this morning in an unconfirmed story; we have done some digging and can now confirm what is going to happen:

A well-placed source tells TechCrunch that the first couple of sentences of articles from The Times will “soon be retrievable” on search engines like Google so that readers can find the stories more easily — effectively unblocking the robots.txt command on the site that disallowed Google from crawling and indexing its articles. Currently the only results one gets when searching for Times articles are section pages and a restricted selection of articles, e.g.: 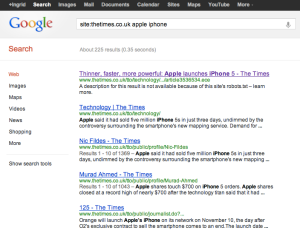 In line with articles appearing on searches, users will also be able to see “truncated” versions of those stories, to be marketed as “free limited previews”. Currently clicking through to an article, when it does appear in search results as above, takes a user straight to a subscription window — not the most warm of welcomes. Putting in an article preview puts The Times and Sunday Times more closely in line with what the WSJ, another News Corp.-owned news site with a paywall, does to draw in readers.

But make no mistake: that paywall will remain intact. To get anything more beyond the preview, visitors will still need to purchase a subscription, TechCrunch understands. These are currently available in three tiers (£2 per week web-only; £4 per week including iPad; £6 per week including the print editions), and it’s not clear yet whether introducing the search features will also mean à la carte pricing as well.

When News Corp. first announced its plans in November 2009 to pull content from Google, it was confident that it could monetize better on a more controlled, if smaller, user base.

“The traffic which comes in from Google brings a consumer who more often than not read one article and then leaves the site. That is the least valuable of traffic to us… the economic impact [of not having content indexed by Google] is not as great as you might think. You can survive without it,” Jonathan Miller, News Corp.’s chief digital officer, said at the time.

But when The Times first put up its paywall and retreated from Google’s search results, the results were dramatically negative for the newspaper. Between the paywall going up in June 2010 and November 2010, comScore reported that some 4 million unique monthly visitors had disappeared. And pageviews were a disaster, down by more than 90% to 4 million in September 2010 from 41 million in May (pre-paywall).

Still, News Corp. has stuck to its guns for the last two years, although that growth of digital subscriptions is not offsetting bigger declines in print.

In July, according to the Audit Bureau of Circulation, The Times’ digital subscriptions stood at 132,777, up from 131,162 in June 2012. The Sunday Times (which gets listed as a separate publication by ABC) actually saw its number of digital subscribers decline. In July they were 126,368, compared to 126,989 in June.

That points to perhaps one reason why News International is changing tactics, and slowly creating a workaround to keep itself from choking, by trying to make better make use of the oxygen that comes from search engine traffic.