Social project management software-as-a-service Wrike released a big update today, including in-line integration of the open source text editor Etherpad. The idea is that instead of attaching documents to a task, the task becomes the document, enabling users to actually do work in the same place they manage tasks.

Producteev released a similar feature based on Crocodoc last week, but Etherpad enables users to make edits to a document simultaneously. 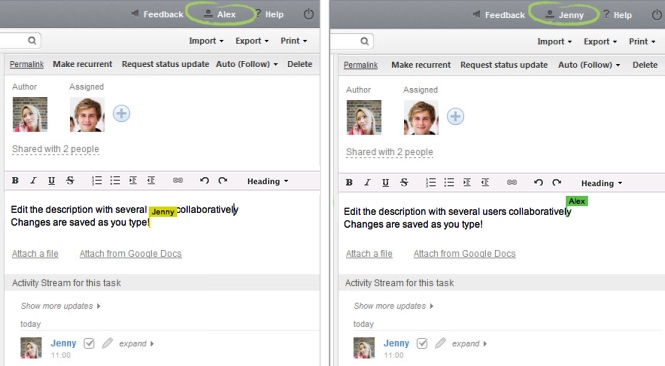 The feature advances the goal that Wrike’s CEO and founder Andrew Filev says he has had since the beginning: unifying collaboration and project management.

Filev says he started his first company, a software consultancy, when he was just 17 or 18. The company grew and eventually had offices on multiple contents. He found himself coordinating work across multiple projects, multiple geographies and multiple roles. He looked at the project management software available and there was nothing that worked the way he wanted, so he wrote his own application. He ended up founding Wrike in 2006, but didn’t take significant investment until the company raised $1 million from TMT Investments earlier this summer.

Social project and task management companies like Wrike, Mavenlink and Manymoon have thrived on the Google App Marketplace for years. But now thanks to the Salesforce.com’s acquisition of Manymoon (now known as Do.com) and the big names behind Asana (namely Facebook co-founder Dustin Moskovitz and ex-Googler Justin Rosenstein), this market is gaining more visibility.

As competition heats up the market is moving towards a unification of collaboration, task management and, eventually communications. We’ve started seeing this already with the unification of the activity stream and inbox interface metaphors in task-centric applications. Wrike is well on its way in this direction already: in addition to its web and mobile apps, Wrike has an Outlook plugin that enables users to work with the product without ever leaving their e-mail clients.