Another startup offering to help publishers unlock the full potential of the images they publish, by making them interactive, shareable and, potentially, ‘shoppable’, gets its full public launch today: Taggstar lets publishers add layers of additional content to images — video, audio, photos, text, and maps — in a bid to increase engagement, and optionally, generate additional revenue via its “create a shop” feature, which takes the heavy lifting out of turning those images into a fully-fledged online store.

Taggstar operates in a somewhat crowded space, which includes the likes of Luminate, ThingLink and Stipple, and similar to those offerings, works by enabling publishers to add ‘hotspots’ to portions of an image so that when a reader clicks on those hotspots or hovers over them, additional content is revealed. This might include other relevant images or links, further text, or audio/visual material, such as embedded video or audio. In addition, images can be easily shared on Facebook and Twitter courtesy of a social sharing toolbar on each image.

But, of course, it’s the e-commerce angle that will likely interest publishers the most. It’s also here where CEO and founder, Fraser Robinson (who was formerly Managing Director, Commercial & Media at lastminute.com), says that Taggstar has a key differentiator. 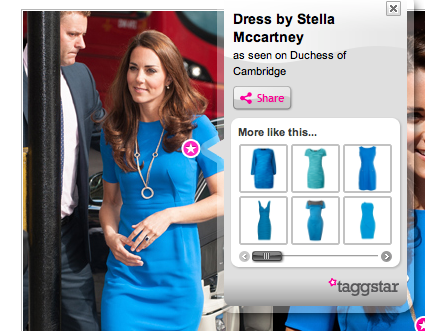 Not only can publishers make their image galleries ‘shoppable’, but Taggstar’s image search technology claims to be able to interrogate hundreds of thousands of product images from its network of over 200 retailers, and display the best results based on colour, pattern and style. It does this by relying on the tags that publishers add to their images when using Taggstar’s platform and by taking a visual swatch of the product being tagged. It then crawls through the XML feeds of retailers who have signed up to work with Taggstar and automatically delivers results by analysing those product images, as well as the related textual data.

Currently, this feature works best with and is being targeted at fashion publishers, who can use it to replicate the ‘get this look’ model traditionally used in print media — see example.

“Publishers don’t need to waste time looking for products to appear in a tag — they simply create a hotspot over an item, and by using a combination of meta data and actual image search, our search engine will dynamically do the rest”, explains Robinson.

Furthermore, he says that the startup’s competitors require publishers to pick a single product to link to when they ‘shoppify’ their images. “But the data shows that visitors prefer choice when shopping, and Taggstar is unique in offering this vital piece of functionality”, says Robinson.

To that end, Taggstar is currently being used by various media partners including MSN, Sky Living, the Telegraph, Hearst Magazines (including Harper’s Bazaar) and The Independent. It also claims that it in its testing so far, engagement rates have been consistently high, “ranging from an average of 12% to almost 40% for certain high profile celebrities.”

The company was founded in 2010 and is backed to the tune of £1.6 million (approx. $2.6m). Investors include Rob Hersov (Founder of Sportal and Marquis Jets), Sir Stuart Rose (Former Chairman of M&S), Dr Thomas Middelhoff (Former Chairman of Thomas Cook and CEO of Bertelsmann), and Ariadne Capital’s ACE Fund.