Everything old is new again… at least in 2012, where some of the new businesses that launch these days seem — to some jaded eyes — to be a little, well, familiar. But, we are assured, it’s all going to be different this time. Thus, back in 2007/08 a startup called Bragster tried and tried to make “dares” between friends a social platform. You could brag about your awesome dares! And… and… anyway, there is a new kid on the block that wants to do something ever so similar. But can iOS app Klash [iTunes link] crack the P2P bragging nut? Let’s see.

Klash is a mobile iOS app – using the Facebook open graph – that is about making fun out of competition. You challenge a friend to something – like drinking 5 espressos in one go. You set a fun reward. You can then share the dare to social networks. Others can join Klash and side with one or the other person on the dare, post comments, add photos, proofs you did it etc. You can see Klashes from the whole Klash community, just your friends or see a flu stream of activity. But be careful what you dare someone – you may have to do it yourself.

The truly international team (five people coming from Turkey, Austria, Germany, Italy and Argentina) sold one car and took the other to drive to Berlin to launch their startup. “Soundcloud has music, Amen has Opinions, Klash has Action” they say.

The only problem is: it’s been done before. A startup called Bragster tried this a few times – raising $3.5M in the process – before hitting on video proofs and selling themselves to the Guinness Book of Records for not a great deal of money. Then there was Uboot and Goanteup which limp on.

The difference this time around is mobile. Klash has a really nice mobile interface, and has a pretty viral feel to it. When people start joining the Klash — something Bragster wasn’t so good at — and the comments and trash talk start coming in, you really do start to feel under pressure.

I can’t see this being the biggest app in the world but if you want an app where you can punk your friends then this may be the one to try. 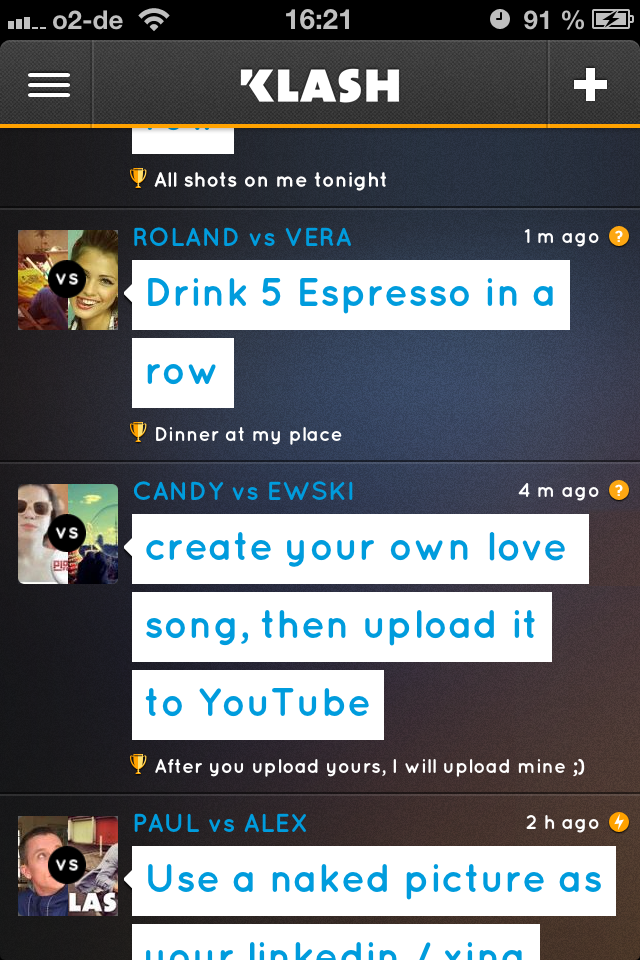