The team behind the ridiculously named food daily deals site MunchOnMe is on to the next one, launching a new startup, Caviar after Munch On Me’s acquisition. Caviar is Seamless “done right” i.e. a platform that allows users to order food “seamlessly” via web. As of today, users in SF can sign up for access to the Caviar beta, which differentiates itself from Seamless by only offering orders from restaurants that don’t typically deliver.

With its focus on curation, Caviar limits its inventory to restaurants that have four stars or higher on Yelp. “[With] Seamless, you don’t really need to use them to get the food. You can call the restaurant yourself and they’ll take the order over the phone and deliver it to you,” says founder Jason Wang, on why Caviar is a net value add in an already crowded space.

In addition to cherry-picking vendors, Caviar also offers picture menus, real-time delivery tracking and no minimum order limits in order to be competitive with startups like Seamless or GrubHub. It also offers scheduling options in addition to “Deliver Now,” with a $9.99 flat rate anywhere in SF and Treasure Island. 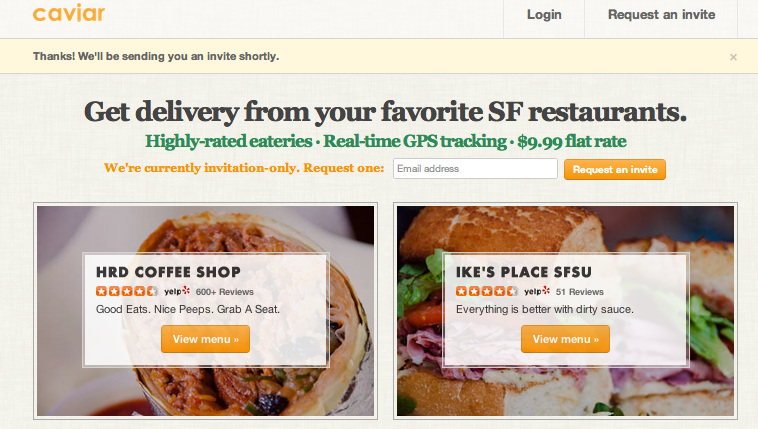 “Our sweet spot with Caviar is businesses. When we ask them what their current solution is, they tell us GrubHub, Seamless, or a catering company such as Cater2me, or Waiter.com/Waiter On Wheels,” says Wang. “We’re better than GrubHub and Seamless (and there are others like Eat24hours and Delivery.com) in every way. They have a laundry list of every possible restaurant and nearly all of them you don’t really like that much.”

In San Francisco, the service is presently offering deliveries from local foodie favorites like Pork Store Cafe and Little Star Pizza, which you’d otherwise have to use something like Postmates to get food from.

Wang tells me the bootstrapped service, which takes a 25% cut from its restaurant partners, is already profitable. In user testing since early July, the average Caviar user has spent $154.07 in the past month.

Today, the first 150 TechCrunch readers who want in on Caviar will receive their invites immediately, and then it’s first come first serve with new invites rolling out daily. The team is hoping to hit up obvious target NYC after it conquers SF’s rarified hunger pangs.