When it rains, it pours. Today, Apple is rolling out the new version of its iOS 6 mobile operating system, and already we’ve come across several companies building apps poised to take advantage of one of the OS’s most notable new features: Passbook. Another new app, called PassRocket, is designed for retailers and other small-to-medium sized businesses (SMBs) who want to be able to quickly and easily create their own passes and loyalty cards for their customers. But the big difference with this one is that it’s free.

Earlier today, we covered Tello’s launch. There’s also Passdock, PassSource, PassK.it, Passhop, and PassWallet (for Android support). Witness the power of Apple – the feature is going live today, and already there’s a whole new industry springing up to support it.

The PassRocket app, like most, allows businesses to design their own loyalty cards for free using their iPhone or iPod Touch. Upon completion, the app creates a link which the business can share with their customers via Twitter, Facebook, or email. When a user opens this link using their iPhone, it then places the custom-designed loyalty card into the Passbook application that became available in iOS 6. This allows the business to take advantage of the various Passbook features, including the new alerting mechanism which pops up a reminder about the available discount voucher or loyalty card when the customer is walking into or near the store in question. 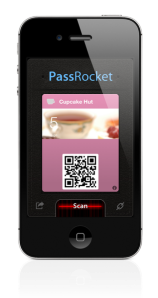 At checkout, the business uses the PassRock application to scan the barcode on the Passbook card the app created, which then allows them to keep track of customers’ visits. Explains co-creator Daniel Bradby, “when the pass is scanned, the backend decrements the value of the pass (e.g. 10 coffees becomes 9 coffees), then pushes and updated pass with the new value out to the customer’s Passbook. The activity of each pass is recorded for each business owner.”

PassRocket also plans to provide some basic customer analytics which can help the company strategize around their various promotions.

PassRocket is an “MVP,” aka a Minimum Viable Product, which is startup lingo that means it’s going to be lacking advanced features and could still have some issues. (The app launches today, and we have not been able to test it in advance). Its creators, Daniel Bradby and Armin Kroll are the co-founders of jTribe, a mobile app development company based in Melbourne, Australia. They developed PassRocket out of jTribe Labs, the company’s “20% time” innovation lab funded by the parent company. However, jTribe tells me that they tested PassRocket on the iOS 6 beta releases and the gold master XCode before submitting the app for Apple’s approval on Friday.

The initial release is targeting cafes, which could use PassRocket to replace their paper loyalty cards. jTribe had five cafes on board during beta tests, and has around 150 businesses who have registered interest in becoming a pilot tester or just learning more about the PassRocket application. 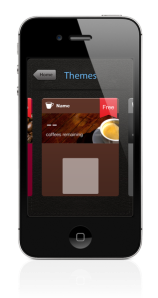 The app itself is free, but businesses can purchase themes to customize their cards for 99 cents. There will be three free themes available out of the initial ten, for those businesses who just want to trial the application first. Businesses can customize their pass’s title, product type and amount per pass. In the future, jTribe will continue to release professionally designed themes for purchase.

These pass creation companies may seem like minor news now, but Apple’s Passbook is setting the stage for what one day may morph into a full-fledged mobile wallet. In the meantime, getting business customers on board with Passbook – especially at the local level – is critical for Passbook adoption. If the app isn’t something you can use but in a handful of places, it will be hard for users to remember to use it – alerts or not. By making PassRocket available for free, businesses of all sizes can easily experiment with Passbook without a serious investment of either time or money, which is what makes this particular service notable.

The PassRocket app is still waiting for iTunes approval, but is expected to go live after iOS 6 becomes available later today. In the meantime, more info is here and you can sign up to be notified here.