Last July, TeliportMe launched an Android app that allows users to capture and share panoramic images. The app, appropriately called 360, gives users the ability to not only capture high-res 360 panoramic views, but share their images on Facebook and Twitter, as well as view, comment on, and “fav” images captured by their friends. Essentially, it’s Instagram in 360-degree mode.

Earlier this year, the team joined 500 Startups accelerator, where they continued cranking away on the difficult problem of OEM compatibility. Because Android relies on so many different device manufacturers, building a quality 360-degree app for the platform ain’t easy, especially considering that panoramic apps are so hardware-centric. Given this uphill battle, most give up and opt to build for iOS. But, seeing as the iPhone 5 launched with a native panorama app, their masochism now seems like a stroke of genius.

Thanks to their work on fragmentation, 360 has become one of the more popular (and OEM-agnostic) panoramic apps on Android, and today has a community of 700,000 users who hail from 150 countries. After bootstrapping their operations while they built and launched 360, the team is excited that it now has a little bit of financial cushion, officially announcing that it has raised a seed round from Dave McClure of 500 Startups, Bill Gross of Idealab, Vedanta Capital’s Alessandro Piol, Great Oaks Venture, and a number of angel investors.

In his blog post announcing the raise, TeliportMe founder Vineet Devaiah said that they will use the capital to expand the team, finally allowing it to begin work on projects that had been sidelined due to lack of that precious human capital.

The team has been updating the app along the way, but with its new capital in tow, they will be looking to push a big update to their Android app in October as well as to launch its first app for iOS. Devaiah’s post also teases the fact that they are working on several partnerships with big-name websites in an effort to “enhance their offerings” to small business, hotels, and real estate.

What does that mean? Well, I’m glad you asked. Look no further than Google’s announcement today, which introduced a way for users to view “indoor panoramic imagery from businesses.” This also has particular relevance given that TeliportMe and Google have some history based on this very feature Google introduced to Google Maps.

Although Devaiah refused to comment, after some digging, we learned that, in fact, Google actually tried to acquire the startup last year, for what a source tells me is in the $15 million to $20 million range. Google, as you may have guessed, seemed to be interested in TeliportMe’s technology that would enable indoor panoramas. 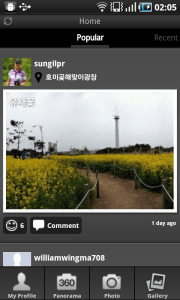 What’s more, and we’re trying to confirm this, but we hear that two other OEMs have shown interest in the tech behind 360. The fact that the iPhone 5 has a native panorama app probably has absolutely nothing to do with that interest, although that is purely sarcastic speculation.

Whatever the case, the startup is developing a pretty nifty app, which is worth checking out. The team still has a long way to go, as it wrestles with glitchy rendering, although 360 has managed to average a 4.1 star-rating on Google Play. Not too shabby.

As TeliportMe adds partnerships and continues to scale, I imagine it won’t be the last time hardware companies come sniffing around. With the integration of AR, higher-res cameras, better stitching and all manners of data integration, it certainly seems like 360 has the potential to be part of some fascinating (and potentially) futuristic technology in the not-so-distant future.