This week is the annual Photokina conference in Cologne, and that means one thing: new cameras. Olympus today outed two of its new offerings, compact interchangeable lens cameras based around Micro Four Thirds sensors. The E-PM2 is Olympus’ smallerst and lightest PEN design, and aimed at entry-level users, while the E-PL5 is aimed more at slightly more demanding users and includes a swivelling screen, but both inherit a number of welcome features from Olympus’ well-received and much more expensive EM-5 model.

The EM-5 was celebrated first and foremost for its autofocus speed, one of the main areas where Micro Four Thirds and other compact interchangeables have lagged behind DSLRs in terms of performance. In hands-on use, Engadget found that focusing with these new cameras was nearly instantaneous with every lens they tried, save for some slight sluggishness when paired with Olympus’ 60mm f/2.8 macro, but macros often have to hunt a bit, and in general the performance of these two seems to push the bar forward considerably for the category. 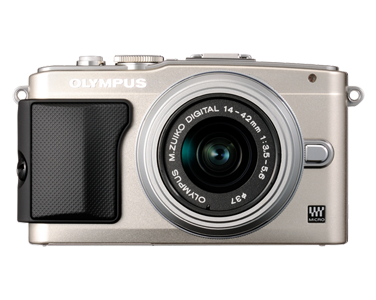 They also sport a tweaked design with retro styling also borrowed from the EM-5, adding a hand grip for the E-PM2 which its predecessor the E-PM1 lacked. Both get an upgraded 16.8MP sensor, and image processing tech that promises improved low-light performance ranging up to 25,600 ISO, and new 3-inch 460,000-dot LCD displays with touch navigation. They also ship with a free coupon for a Toshiba FlashAir card, which operates like an Eye-Fi SD card to sling media from your camera to your computer wirelessly But maybe coolest of all, Olympus also introduced a new lens for its PEN line that alos doubles as a body cap, which a fixed focal length of 30mm operating at f/8.0. It makes for a super slim profile on the new PENs, making them almost, but not quite as pocketable as something like an RX100 with a lens that’s decent for walkaround outdoor shooting.