When it comes to conducting research for papers, homework assignments, etc., students primarily turn to the Web for information despite its inherent academic dangers. Naturally, with the diversity of content out there, keeping track of pertinent links and bibliographical data is difficult when jumping from source to source. Citelighter launched in the fall of 2011 to address this problem by creating an academic research platform that helps students save, organize and automatically cite both online and offline content. An Evernote for Education.

As such, Citelighter is a great time-saver for researchers and students, but it still suffers from a fairly limited use case. Plus, the Web’s sea of content is rife with opinions, half-truths, and unreliable sources. To truly be an indispensable resource, Citelighter has to move beyond being a time-saving feature and provide students with easy access to credible information. So, today, the startup is launching a new product that allows users to access a repository of millions of credible academic articles from more than 6,500 sources, including journals, magazines, newspapers and transcripts, for $10 per month.

How is it doing this? The new “Pro” version of Citelighter is a result of a partnership with Cengage Learning, one of the largest educational publishers in the U.S. that produces teaching, learning, and research solutions for academic and library markets. Cengage is probably best known for its online research and paper writing resource, Questia, which helps students find and cite high-quality scholarly research from a huge library of books, academic journals, and magazine and news content.

Citelighter’s integration with Questia, then, aims to help students with their various research-related tasks by letting them tap into collections of relevant, authoritative resources rather than rely on Wikipedia. Beyond that, the startup’s new “Pro” product automatically makes recommendations on relevant content based on users’ research patterns. This premium content will be displayed on Citelighter’s so-called “Knowledge Cards,” which are essentially collections of facts and links curated by a team of Citelighter experts and organized by topic.

As a part of the launch, the startup is also adding plug-in support for Chrome and Safari on top of its existing Firefox extension. Over the next few months, the startup plans to add more functionality, including the ability to capture content from PDFs, which will allow users to expand their use in professional research databases.

So, looking at Citelighter now from two miles up, the team has essentially created a two-sided and complementary marketplace for information. On one side, you have a tool that allows users to capture information and utilize it in a useful way throughout the research process, and the other side allows you to see what information others have found useful. 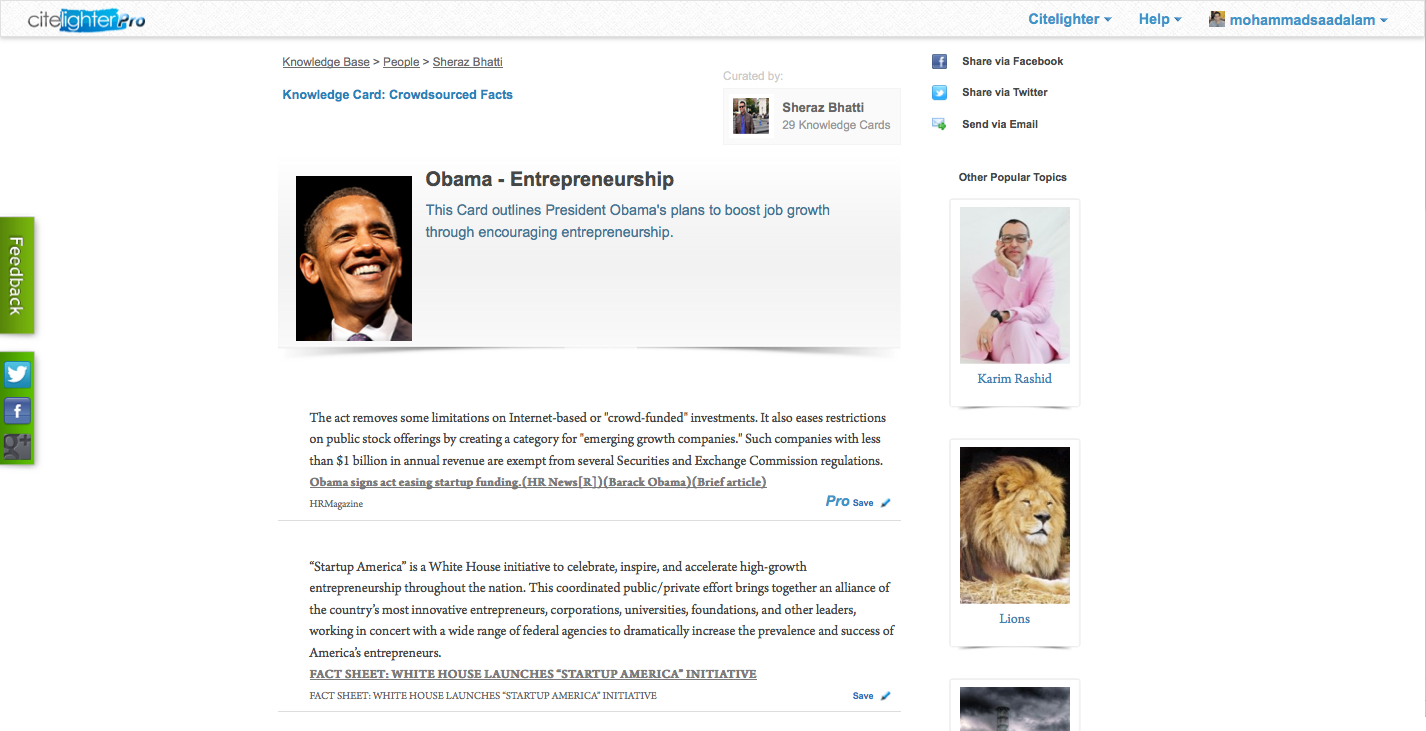 Its core product, the capturing side (in other words the browser extension), enables users to save, organize, and cite information for research and papers. Citelighter CEO Saad Alam compares the functionality to Evernote, in that you can grab content from wherever you find it or enter it from books or journals, with the difference being that Evernote essentially requires you to re-curate all this information once you have it entered.

Citelighter, on the other hand, offers a number of research and academic-focused tools that let you grab specific facts and do something useful with them, i.e. export facts, comments, in-text citations, and a fully-formatted bibliography — all into a Word document with a few clicks.

Another cool feature includes the ability to work on several projects at the same time, organizing cited information on the fly. Of course, Citelighter isn’t alone when it comes to building full-featured research-based products. Zotero and Mendeley are both competitive with the startup, at least in the big picture. Yet, while both offer great products and relatively deep functionality, they require investing time to master and are really targeted more at professional researchers rather than the everyday student, Alam says.

In reality, high school and college students don’t need a tool that lets them collect 200 citations for a paper. Instead, they want something that allows them to collect 10 or 15 citations quickly and requires little training or onboarding. Plus, having been one myself, I can attest that students love it when a tool or service automates what would otherwise be a pain in the ass, like formatting a bibliography, so they can focus on writing a poorly structured argument instead.

Enter the PDF feature that Citelighter is planning to launch, which will enable students to capture information from other sources outside of Questia, such as Ebsco, Jstor, etc. 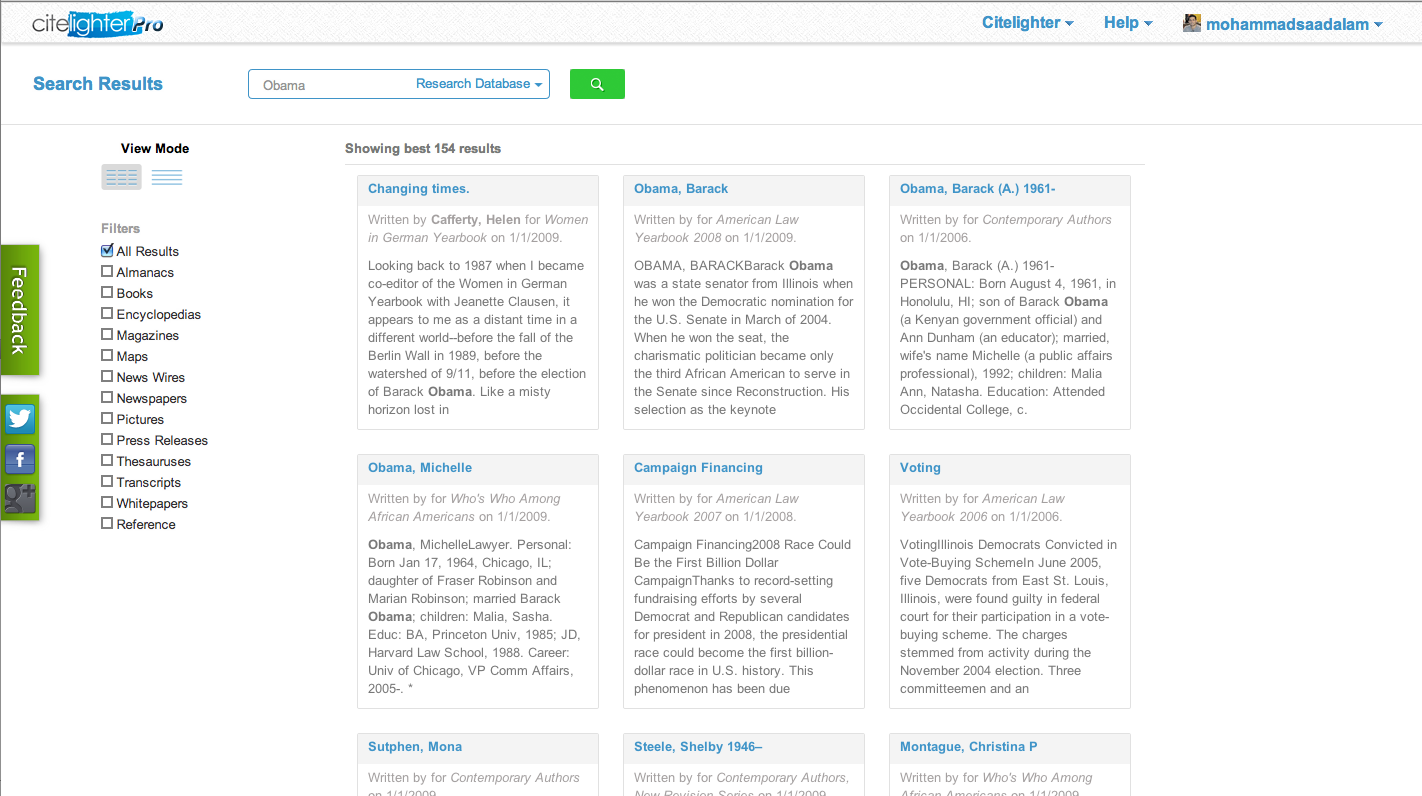 With its launch of “Pro” today, the startup has begun to flesh out the other major component of its product — the information-sharing side — in which it saves all the curated content from its users and repurposes it for the community. This means that users can search through facts curated by other users through an internal search engine, refer to original sources to get context, or just save them to their projects with a few clicks.

To enhance its information sharing, the startup has recruited 125 of these aforementioned “Knowledge Experts,” which the CEO says are students with high GPAs from highly ranked universities that were subjected to a rigorous vetting process. These student experts curate facts on Citelighter on specific topics, as Citelighter has begun aggregating facts on several thousand of its Knowledge Cards, which can be found by internal search and are being indexed by search engines so that non-users can find them, as well.

The CEO says that the Knowledge Cards are similar in concept to both Quora and Wikipedia, particularly in the way that the former has created a platform for expert and community-curated content from highly credible sources.

Next, the CEO says the team wants to add social features around these Knowledge Cards so that students could, say, have conversations both individually and focused around particular Cards. The startup has also begun to reach out to real-world experts who have begun curating Cards and adding their own commentary.

In terms of its new partnership with Cengage, the startup will be splitting all sales of its Pro product through a 50/50 revenue share. While that may not be optimal, being a multi-billion-dollar educational publisher, Cengage provides the young startup with reach that would’ve taken years for it to construct itself. Eventually, Citelighter wants to integrate with all of Cengage’s reference materials, but it’s beginning with Questia first. After all, Questia is the company’s flagship research product in secondary ed markets (one that they’ve recently revamped), so Cengage is putting a lot of support behind it.

So why should you care? Big picture: Citelighter’s goal is to transcend typical classroom learning and enrich the full spectrum of education (learning, researching, and sharing knowledge) in a way that’s intuitive but also pushes the envelope. The startup’s core product can be used by anyone to quickly aggregate useful facts, while Cengage’s content adds a depth of information that is nearly impossible to replicate and really isn’t available anywhere else.

To support the launch of Pro, Citelighter is also raising $750K in seed funding (it’s currently three-fourths of the way there), with a number of current and former execs from big-name media companies, as well as entrepreneurs, participating in the round. Investors include Peter Bordes, the founder, chairman, and former CEO of Media Trust; Chris Schroeder, former CEO of the Washington Post and Newsweek Interactive; and Myspace co-founder Joe Abrams.

When asked why he decided to invest in Citelighter, Bordes said:

I invested in Citelighter because they are taking the traditional concept of highlighting and fact curation and giving it a modern digital makeover. The company is approaching learning and knowledge management from a unique perspective, which begins with the student market, and when paired with Cengage’s premium content, can become a very powerful solution for learning online.

More on Citelighter at home here. 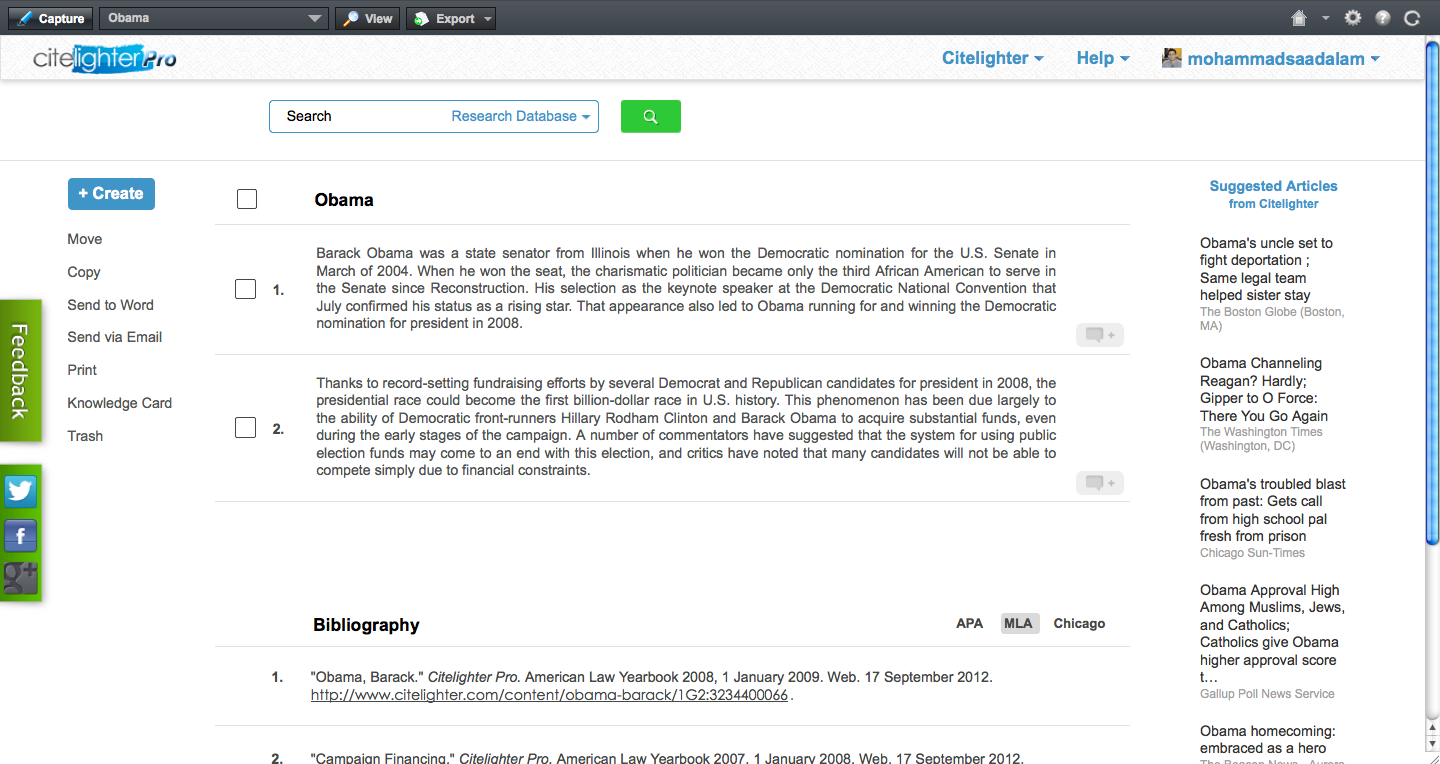