We’ve probably all heard horror stories about businesses that offered deals on Groupon or similar sites, only to lose a lot of money on a promotion that didn’t bring in any repeat customers. Now a startup called CauseRocket is launching an alternative to the standard daily deal, one that could avoid those horror stories and also raise money for cause-based organizations.

The idea comes, in part, from founder and CEO Faisal Qureshi’s past experience founding and running Offermatic, a Kleiner Perkins-backed startup allowing merchants to deliver targeted deals based on your credit card purchases (TechCrunch’s Jason Kincaid described it as “the freak love child of Mint, Groupon, and Blippy“). Qureshi says he didn’t realize how long it would take to sell merchants on the deals, and ultimately, he shut the company down and returned the investors’ money.

So why will CauseRocket be more successful? Qureshi says he’s reduced the risk for merchants, and also found a smart approach to distribution. Here’s how it works: Causes partner with businesses on an offer — for example, the business could offer $25 worth of smoothies, and commit to donating $10 of that purchase to the cause. The cause promotes the offer to its fans and supporters, who then make the purchase on the CauseRocket site. The buyer gets a voucher that can be redeemed at the store, and CauseRocket distributes the money as promised (it also takes a 5 percent commission from the merchant). 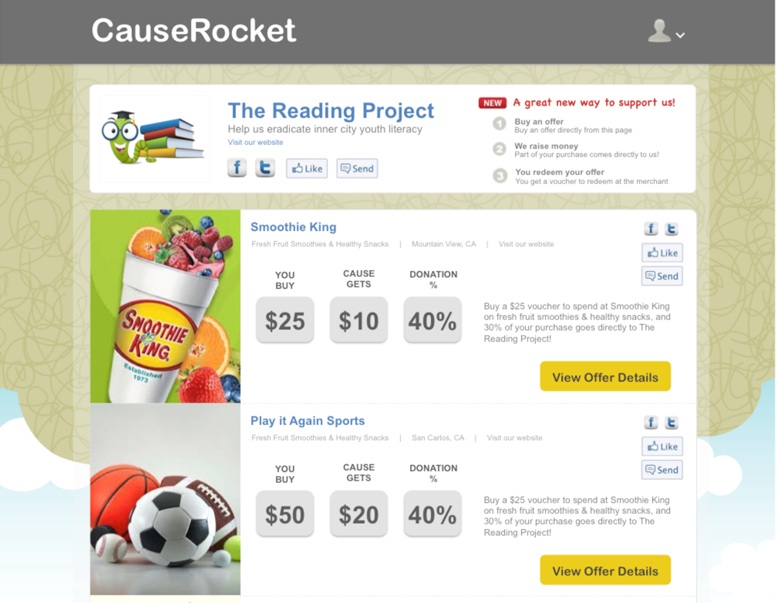 The merchant is still taking a smaller payment than usual, but to consumers, it doesn’t look like a deeply discounted daily deal. That means the offer isn’t likely to attract the bargain hunters who show up for a discount and never come back. Plus, the new customers brought in by the deal should be more inclined to come back, or at least leave with warm and fuzzy feelings, since the store is supporting a cause that they care about.

And from CauseRocket’s perspective, it no longer has to build up a big audience of consumers before it’s valuable to merchants. The cause-based organizations are the ones responsible for reaching the potential shoppers. Many of those organizations already have a big following on Facebook or Twitter, as well as a large email list.