Overall satisfaction with the mobile experiences of 20 of the largest online retailers registered 79 on the Index’s 100-point scale, with scores ranging from 76 to 84. Almost half of the measured retailers scored 80 or above, which ForeSee considers to be a benchmark for excellence. Amazon topped the list at 84, followed by Avon (83) and Apple (82).

The survey reports that the mobile web experience for retail lags traditional retail web satisfaction significantly. Websites appear fairly uniformly across standard PCs and laptops. But because there are dozens of different screen sizes, operating systems, hardware specifications, and loading speeds; mobile is a challenge for retailers. In a comparison of mobile satisfaction scores to web satisfaction, nearly all of the top retailers perform better on traditional websites.

Other key findings from the retail edition of the ForeSee Mobile Satisfaction Index find that app users were slightly more satisfied than mobile web users. 68% used a retailer’s mobile website, while 32% used a retailer’s app. The highest app usage among measured companies was for Netflix (59%), eBay (53%), Groupon (52%), and Walgreens (48%).

First-time users of a mobile site or app tend to be less satisfied with their mobile experiences as they learn new layouts, navigation, and functionality. Customers already familiar with a brand are more satisfied than people who were driven to the company’s mobile site or app via search engines or shopping comparison sites. The most popular tasks performed on mobile retail sites and apps were: looking up product details (28%); looking up price information (19%); and checking stock at a store (17%).
Seventy-six percent of those surveyed used mobile phones, while 24% used tablets. 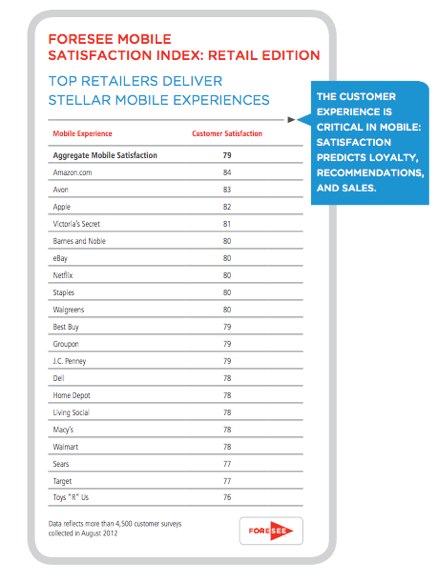