Livestar, which is officially launching at TechCrunch Disrupt in San Francisco today, wants to help you find personalized recommendations from your friends and authoritative sources around the web. Livestar, which is currently only available on the iPhone, argues that most of the major review sites like Yelp and Amazon are due for disruption, because they don’t offer personalized ratings and often suffer from low-quality reviews. The best sources for recommendations, the company says, are your friends and professional critics you already know, but finding their opinions is often tough. Livestar currently focuses on restaurants, movies, and music, but the company plans to add apps and wine recommendations soon. 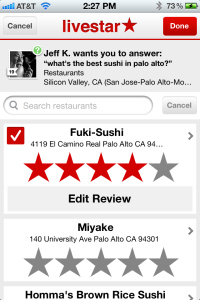 According to Livestar’s founder and former Microsoft executive Fritz Lanman, it took the company about 18 months to build its service. Most startups, he says, simply don’t have the resources or engineering skill required to build the kind of NLP-based recommendation system and search engine the company has developed. With Livestar, users can, for example, search for “romantic French” restaurants and the app will then sort recommendations by group. These groups can also be customized, so if you don’t trust reviews from the Village Voice, for example, you can just tell the app to ignore them.

For most recommendation engines, the first user experience after a cold start is a major problem as there is very little to recommend without knowing anything about the new user. Livestar gets around this by aggregating reviews from professional reviewers.

As for the service’s social network, the company is using a Twitter-like follow module and also integrates with Facebook. Livestar also assigns a Klout-like “taste-maker score” to every user. 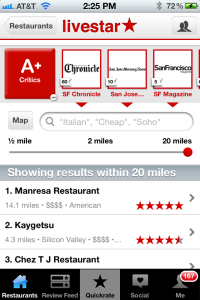 Livestar combines its recommendation with a Q&A product that allows you to quickly poll your friends’ opinions on Facebook and Twitter or through an email or SMS. Users can also add their own reviews to the service right from the mobile app. One nifty feature of the app is that it also trawls reviews for specific menu items for its restaurants recommendation engine. Similarly, you can drill down to the actor level in the movie recommendation module, too.

No doubt, this is a pretty crowded space already, though Livestar convincingly argues that none of the smaller startups in this space have yet managed to get any mainstream traction. The company believes that its combination of a smart personalized recommendation search engine, together with its viral Q&A product, will allow it to challenge its larger competitors. 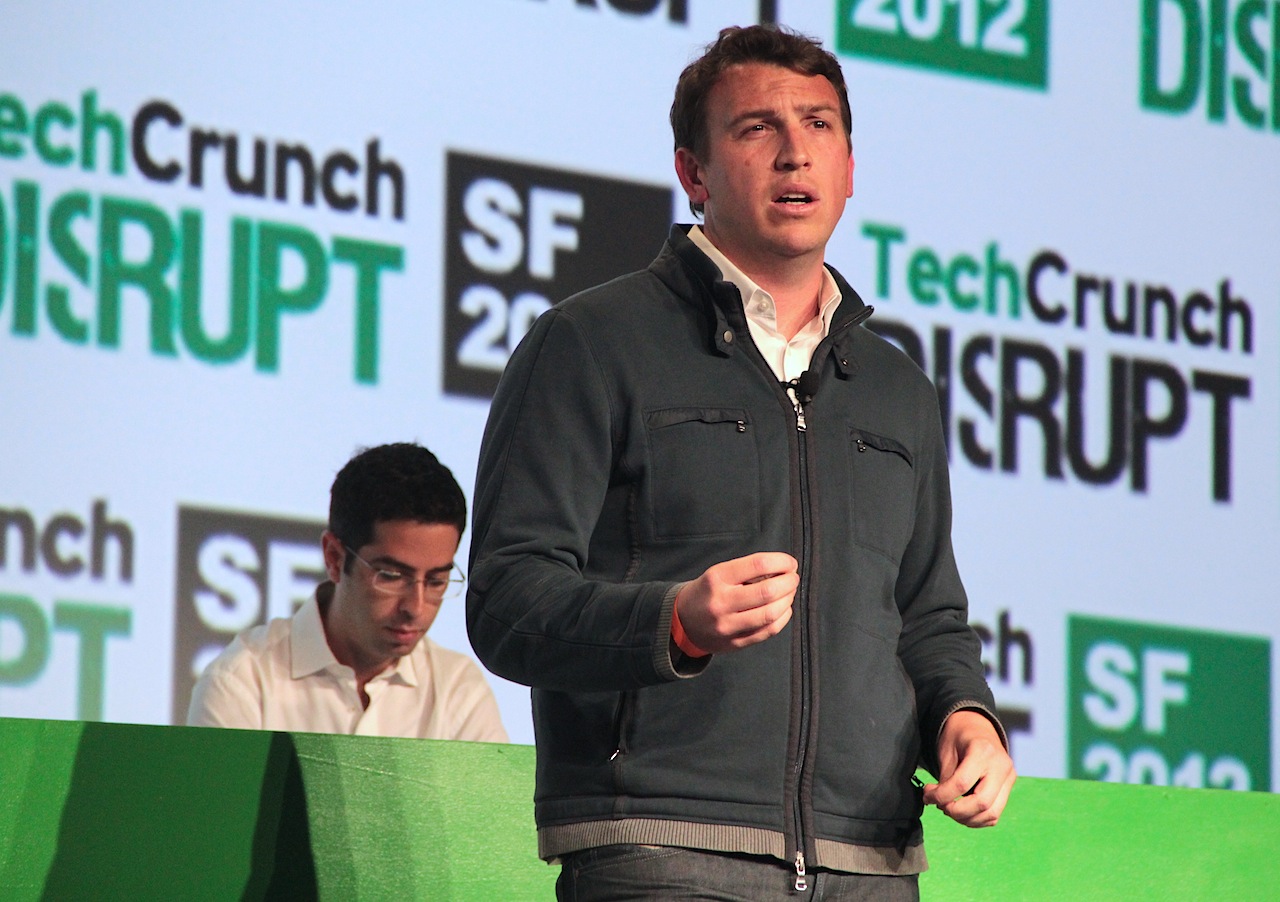 Q: How you get lots of users. There are so many recommendation apps already.
A: It’s the hardest problem that a startup in the consumer space faces these days. We are doing something that nobody else has done. Many of the taste makers also want to be featured on the service and in exchange, they will promote us.

Q: It’s really hard to get instantaneous recommendations from your friends. Will this really drive user growth.
A: We try to take out most of the effort and make it easy for people to give recommendations. Majority of beta users gave reviews.

Q: Why did you not choose commerce?
A: Go-to-market prioritization. We looked for categories where people have strong opinions. Going to look at hotels and wine later. 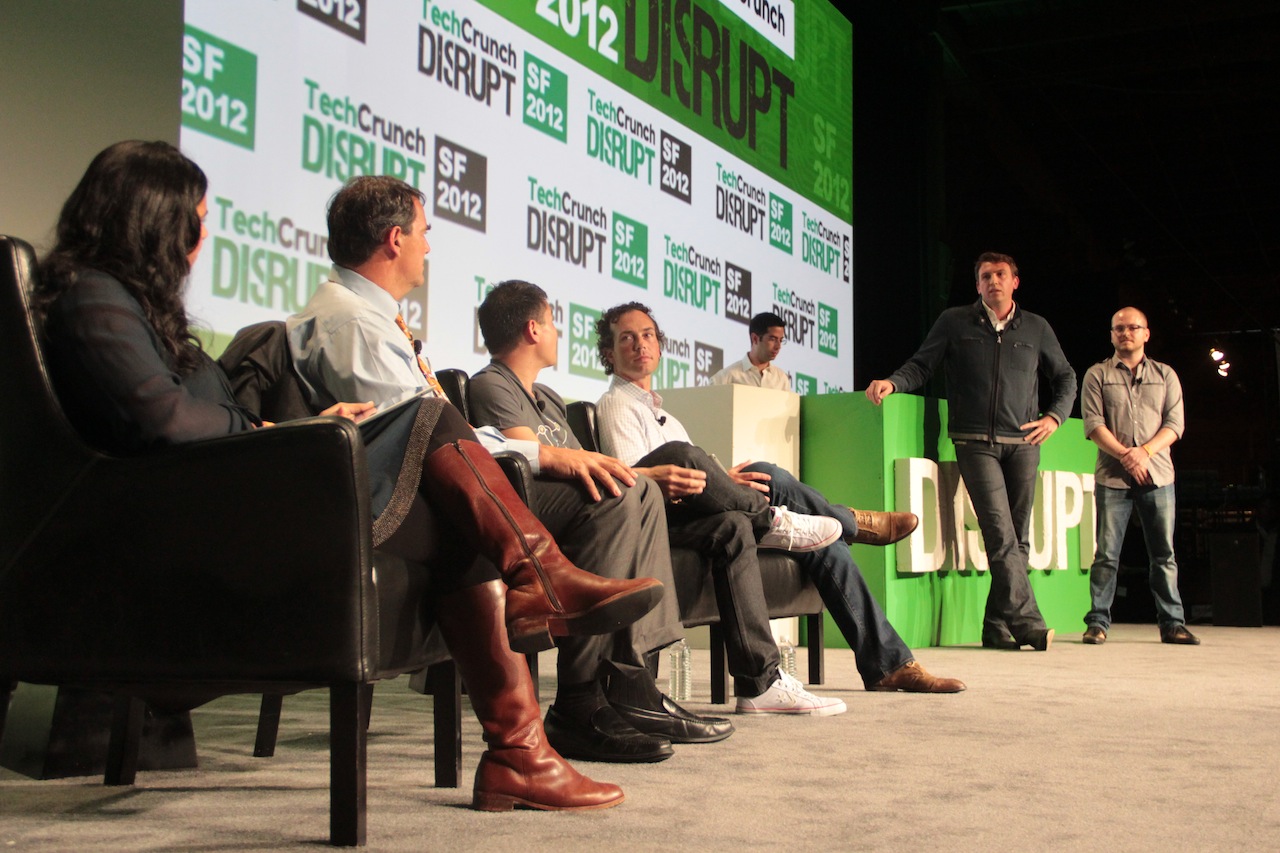