Chris Hawker, the founder of Trident Design, LLC, has over 20 years of experience developing and commercializing his own and others’ inventions. His most famous product, the PowerSquid, was the subject of a six-part series published in TechCrunch called the Song of the PowerSquid.

As the president/founder of Trident Design, LLC, I’ve been inventing and commercializing products for 18 years, and all the successful ones get knocked-off.

Even the not-so-successful ones are eventually flattered in this way. It’s pretty quick, generally. If you’re lucky, you’ll get a couple years, but if your product is on shelves and people are seeing it, they will be “inspired”. It’s not even necessarily nefarious. It’s human nature. People see a possibility they didn’t see before and it opens their mind: to something very similar to the new innovation. They become blinded by the innovation and can’t see any other possibilities. Sometimes it is ill-willed, however, and companies make intentional rip-offs. Some companies actually specialize in this. The only thing that will discourage them is the threat of patents. So the inventors’ objective is to come up with an innovation that can be reasonably protected with a patent. If the product really takes off, you can try and hold on to your market, at least for a time. However, a patent does not enforce itself and you will have to be proactive to protect your territory. This can get very expensive (over $1 million for a lawsuit), so it will typically only make business sense for big-time products, like the iPhone.

In any case, patents don’t last forever; they expire (20 years for utility patents and 14 for design patents). They exist to encourage innovation by granting inventors the right to own their creations and pursue investment without fear, or at least with recourse, from knock-offs. Market forces will eventually take over, whether or not a patent exists, and the knock-offs will appear; and so will true innovations that actually improve on the original. An “innovation” is what we call a “knock-off” that makes something better rather than just cheaper. That said, the nature of “knock-offs” is always to be cheaper. When is the last time you saw a copy BETTER than the original? 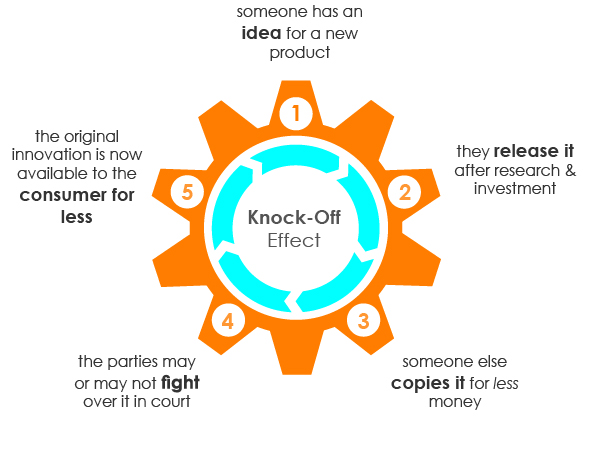 This is how the Knock-off Effect works: someone has an idea for a new product which they release after research, development and investment. Someone else copies it for less money (because that is their nature) and in a much shorter time span as the hard part has already been done. The parties may or may not fight over it in court, but regardless, the premium the innovation commands is diminished. The innovator reacts to protect their market share by going out and making something new (because that is their nature) and the cycle repeats, meanwhile the original innovation is now available to the consumer for less.

The deceptively insightful little book, Who Moved My Cheese? presents this cycle through a rat and cheese analogy: one rat goes out and finds some cheese, other rats join in and once someone moves the cheese, some rats will keep going back and complaining about where the cheese used to be but some rats will go out and find another cheese. The first one there gets the choicest bits of the cheese and the others scramble for parts. You see this scenario a lot with Intellectual Property (IP). Innovators see the new opportunities and the other companies come along to copy it. As an innovator you need to recognize when to move on, and not merely sit back and bemoan the inevitable. This doesn’t mean you shouldn’t fight when you need to (and it makes sense to) protect your invention in order to maximize your return; but you also need to keep innovating.

When really large amounts of money are involved, as in the case of Apple v. Samsung, it makes sense to fight in court. Apple came out with an innovation that was guaranteed to be imitated by other people who just hadn’t seen the possibilities before. One possibility I see is that once they had seen the iPhone, it’s not that Samsung didn’t want to innovate, but rather that they were blinded by Apple’s design. They simply couldn’t imagine anything else that was equally cool that was not remarkably similar, and so that is what they produced. This is a manifestation of the Knock-Off Effect, and now consumers can get really great smartphones without buying into Apple. The courts decided Samsung walked too close to the line, and the success of those products in question was based on how close to the line they were walking. Hopefully as a result of Apple’s win, companies will try and walk further from that line and we’ll see more product diversity which will benefit the consumers by giving them more variety in their purchase of smartphones.  Meanwhile, while Apple is snagging an extra billion dollars from an already old design and dealing a blow to a major competitor, don’t think it is not already moving on to the next innovation.

The truth is, knock-offs happen every day to every innovation. Most Inventors can only watch the value of their IP decline as the knock-offs emerge. But that is the reality of the world we live in (the same world which allows almost anyone to play in the inventing game, so don’t get too bitter). So keep inventing and let someone else pick up the crumbs. Just remember that with the Knock-Off Effect, speed is your best friend. Speed to innovation, speed to market and speed to general awareness in the public eye.

Take for example the pizza cutter: someone first comes out with the wheel blade and stick handle model and that becomes the standard for a long time and a whole bunch of people copy it.

Then Zyliss comes out with the idea that the handle doesn’t have to be a stick, which opens up the mind to non-stick-and-wheel pizza cutters.

Zyliss is selling their pizza cutters and then Alibaba Factory X sees this, and they are already making pizza cutters, so they can replicate the new design easily.

Now Zyliss has to decide to whether or not to pursue a patent lawsuit based the value of their intellectual property and the cost of the legal battle. The knock-offs are on shelves regardless of a lawsuit putting price pressure on your products, this is good for the consumer because now they are getting better prices due to the competition.

Now someone, Trident Design (my company), creates a new innovative pizza cutter, the Pitzo, which improves upon every design advancement made to date. Now we will inevitably go back into the cycle again.

Knock-offs help drive the prices down for the consumer, forcing innovation. It’s all part of the innovation ecosystem. Even though it’s frustrating for the inventors to be copied, they’re innovators by nature, so they are in the best position to respond to it and stay one step ahead. That market pressure is what continues to drive more and more value to the end-users. Today you can buy a pizza cutter that is very effective thanks to the designs that were created due to market pressures brought on by knock-offs in the Cycle of Innovation.