Oh did you hear? Amazon announced a bunch of new Kindles yesterday. And here’s another little tidbit – those devices, the Kindle Fire and Fire HD, are also getting an updated version of the Amazon Silk browser. The “cloud accelerated” mobile browser has received a handful of its own improvements, says Amazon, including faster page load speeds, better HTML5 support, an improved Start page, and more. But one of the more interesting features is a new section which Silk calls “Trending Now.” This section identifies which webpages are seeing an unusual amount of traffic, indicating that they may contain some noteworthy information. That’s right – Amazon Kindle’s web browser is now watching for breaking news based on Kindle Fire user behavior.

Crazy, right? Not really. I guess that’s the benefit of vertical integration. Amazon Silk on the Amazon Kindle Fire tablet with Amazon web services and EC2 doing the heavy lifting, like the rendering of webpages. One of the touted benefits of such a setup was that Amazon could now track user’s behavior (you know, not in a creepy way), so that the browser could detect which websites a user tended to visit more often, and pre-cache the content so it can be delivered faster. Amazon called this process “Dynamic Split Browsing.”

In a video, here’s how the company described this feature back in 2011:

You can think of Amazon Silk as a small store for files you access. What we have done is create a limitless cache used to render the web pages you view every day. It does not take a single byte of storage on the device itself.” 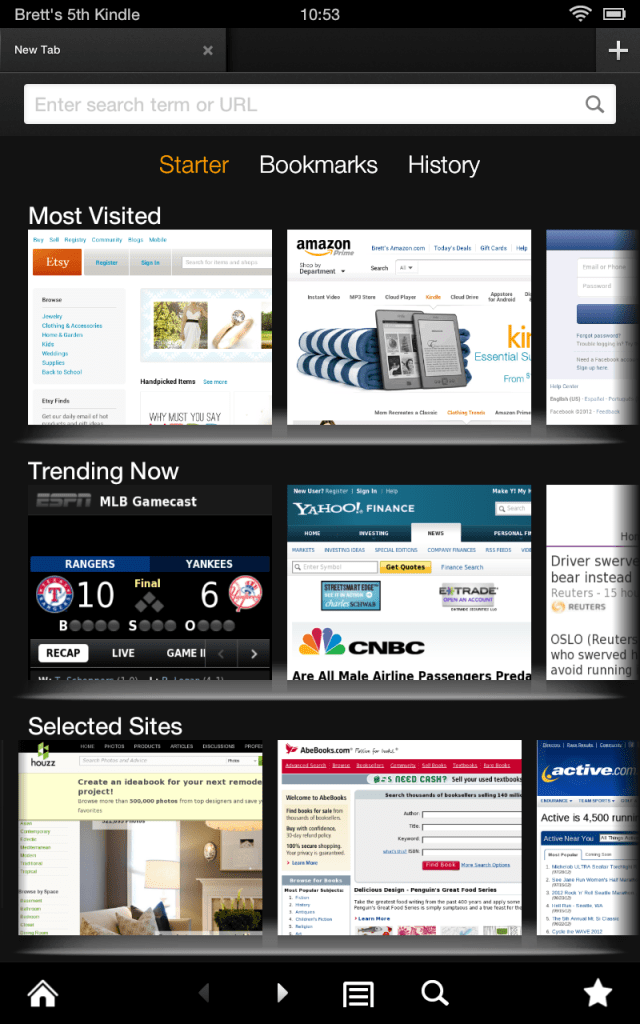 And now, Amazon’s ability to track users’ behavior is helping it sell Kindles, because Trending webpages – identified via this same technology – are now a Kindle feature, too. Interesting strategy, Amazon.

That was the significant detail that caught my eye upon hearing the news. I’ve reached out to Amazon for more info on opt-out procedures, and will update when I hear back. Not that Amazon Silk is aggregating personally identifiable information, mind you, but some people would like to know when their data is being put to use like this. And some people just don’t trust big tech companies in general – especially when Amazon’s in the business of selling you products based on personalized recommendations. What a treasure trove of irresistible data your browsing habits must be for them!

[Update: Amazon says “customers can turn off the cloud acceleration feature of Silk from the settings menu at any time, and their data will not be aggregated for the Trending Now feature.”]

Another improvement to Amazon Silk, as noted above, is better page load speeds. In internal benchmarking, Amazon found that Silk now registers at least a 30% reduction in page load latency compared with the original version of the Kindle Fire. Silk also registers twice the HTML5 compatibility score (via html5test.com) with improvements in form and element support, geolocation (not for tracking you, I’m sure – just web apps and web content, says Amazon), IndexedDB, web workers, and web notifications. Developers have been pushing for these and more, including in-browser access to the camera, which Amazon says will come “in the months ahead.”

The Start page has also become more organized, no longer displaying a haphazard collection of recently visited sites and bookmarks. Now, those two items are separated, and the Start page itself includes the “Trending Now” section as well as a new section called “Selected Sites” which Amazon says will display other webpages it thinks customers might find interesting. And how does it know what customers might find interesting? Oh right, all that data it’s tracking. Google Zeitgeist, look out. Amazon is starting to build one of its own.