I should also mention that approaching this official launch, I’ve been playing with the iRig STOMP for a week or so, (coupled with the iPad version of AmpliTube Slash), and the pedal is a real gas. It’s a really great little piece of hardware.

It’s been nearly a year since the pedal was announced at CES 2012. I saw it at the mega trade-show and was smitten, I can’t lie. Why? It promised to deliver something that was sorely missing from the native app/amp simulator ecosystem — a way to make native app mobile amp software really behave like and work with real guitar amplifiers. What was missing? Bypass. Gain. The tactile interaction of a real stompbox. Does the iRig STOMP deliver on these missing behaviors? I think it does.

Bypass
Part of the problem with using native apps and mobile devices as live effects processors for real amplifiers is that it can be tricky to truly bypass the apps and just hear the raw sound of your amp. It can be done, but it’s not always easy nor hassle free. It sounds silly, but one of the great things this pedal does is simply let you NOT use any effects. It lets you accomplish this with a click of your foot instead of noodling with a bunch of virtual knobs on a touch screen. That’s important.

Gain
It has a built in gain boost. This really adds strength to the signal you are sending to your amp.

Tactile Interaction
If it feels like a regular guitar pedal and you can hit it as hard as you would a regular pedal…it must be a real pedal right? Yes, I think it is a real guitar pedal and not a toy. As real as any A/B box or distortion pedal I’ve ever used (well, it’s still no Sovtek Big Muff, but you get what I’m saying here).

The Negatives
Honestly, I can’t think of any. It’s a great interface between iOS apps and real amplifiers. It’s $59.99 and it works as advertised (pretty much like all the other IK Multimedia products I’ve tried). I have yet to be disappointed by any of their hardware or apps.

But Could You Really Use This At A Gig? I Mean, Really?
I think you could. I was able to make my Mesa Boogie Walkabout bass amp sound like a crushingly loud Marshall JCM (again coupled with IK’s AmpliTube Slash iPad app). I don’t have a decent guitar amp these days, and I’m tempted to give this a whirl.

I’m sure purists could scoff at the idea of using a pedal to control an iPad that controls an amplifier, and honestly, I’m usually a bit squeamish about “software solutions” for guitars and basses in live situations, but this setup seems like it might actually work for my rhythm guitar aspirations.

Although I should note that in the setup I put together, I am not really able to easily simulate going from a distorted rhythm channel to a distorted lead without adding some other kind of boost pedal in the signal chain. But for switching back and forth between clean and affected tones, it was pretty great. 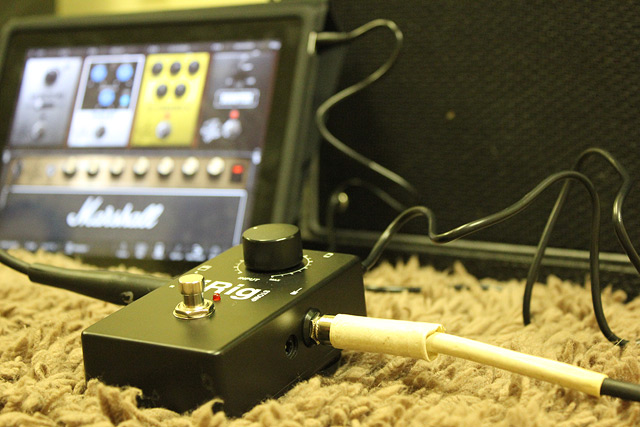