Google announced a couple of updates to Google Maps today. The Google Maps Navigation app for Android, for example, will now offer turn-by-turn navigation for India. In addition, Google has also turned on live traffic data for six large Indian cities and their suburbs. These cities are Bengaluru, Mumbai, New Delhi, Chennai, Pune and Hyderabad. Today’s update isn’t just about India, though. Google is also launching biking directions and Map Maker for New Zealand and, just in time for the start of the next semester, the company is bringing Street View imagery to 150 universities around the world. 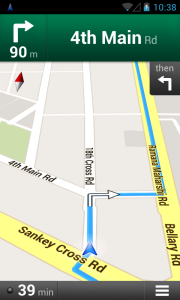 The main update here is obviously the arrival of voice-guided turn-by-turn Google Maps Navigation and live traffic data in India. In 2011, there were about 24 million smartphone users in India and analysts predict that this number will double this year.

Android users in India, which Google describes as “one of the most dynamic and fastest-growing markets for online map services worldwide,” will now have access “to information about any of the thousands of cities, towns, roads, and points of interest that have been mapped by users in Google Map Maker.”

As for bringing Street View to more university campuses, Google says that ” freshman students, transfers and even empty-nesting parents can now familiarize themselves with college campuses around the world, including UCLA in the U.S., Pembroke College in the U.K., McGill University in Canada and Sophia University in Japan.”