Google just mistakenly announced updated versions of its Google Drive apps for iOS and Android that will go live within the next couple of days. Google has since deleted this post, but the updates are scheduled to arrive soon. Both native apps are getting a slew of new (and necessary) features that will make them far more usable, but most importantly, the iPhone app will soon allow you to edit documents right in the app. Before, the only way to actually edit a Google Docs file on iOS was through Safari, which wasn’t exactly a comfortable experience. Now, just like on Android, iPhone users can use a native – and much more fluid – interface to edit documents on the go. In addition to Google Documents editing, the Drive iPhone app now also allows you to view Google Presentations.

The Android app, too, will get a number of new features. You will, for example, finally be able to create folders, move documents between folders and upload files to specific folders. In edition, you will also be able to create and edit tables in documents and view and present slideshows from Google Presentations. With this update, Google also plans to bring the ability to comment on documents to Android.

Google confirmed to us that an update is indeed in the works, but wasn’t ready to confirm the specifics. Here is the company’s official statement: 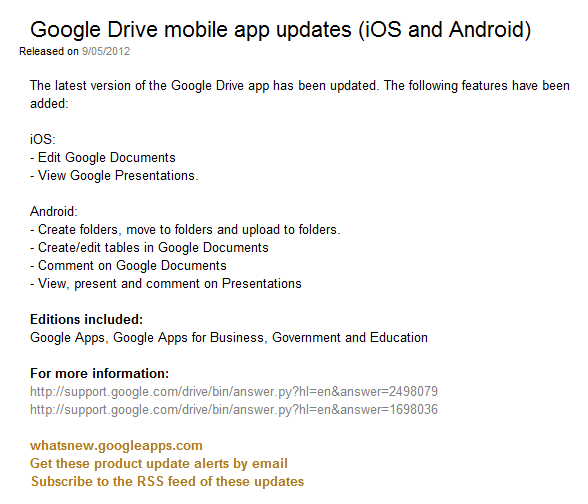