Joining a new group of companies looking to build services on the backs of users’ social networks, Irrive is debuting its social scrapbooking website, soon to be followed by its mobile apps. The company was founded by Steven Cohn, whose previous startup BuyYourFriendADrink was acquired by LivingSocial back in 2009, helping LivingSocial to enter the daily deals market. Irrive’s focus – although playing in the same general social space – is a bit different, however. It’s focused on automatically organizing content from networks like Facebook, Instagram, Twitter, Foursquare and Flickr into attractive virtual scrapbooks centered around life events, like vacations, holidays, weddings, parties and more.

Irrive founder Steven Cohn said he had “gotten the itch” to do another startup in recent months. (He previously worked at Living Social following the sale of BuyYourFriendADrink, and later spent time running the publisher business at Quantcast.) Work on Irrive began last summer, and it first launched into a small private beta this May.

“I’ve always tried to start companies that are based on a need or a fundamental frustration I have with existing products – or the lack of existing products,” explains Cohn. “I love social media, and I’ve always been a heavy social media user. There have been a number of products that have sprung up and have critical mass, and they all have their strengths and their weaknesses,” he says, talking of services like Twitter and Facebook. “And there’s a ton of information that my friends share that’s useful to me and has a high utility,” Cohn adds, “but three months later, when I want to recall that information, it’s impossible to organize and discover that information.”

So that’s what Irrive helps to solve – a way to look back through the highlights of your social media posts, shares, and photos. And you’ll soon be able to search through the shares from your friends as well, which can help you discover new things – like travel suggestions (e.g. type in “Paris” to see who has been there). 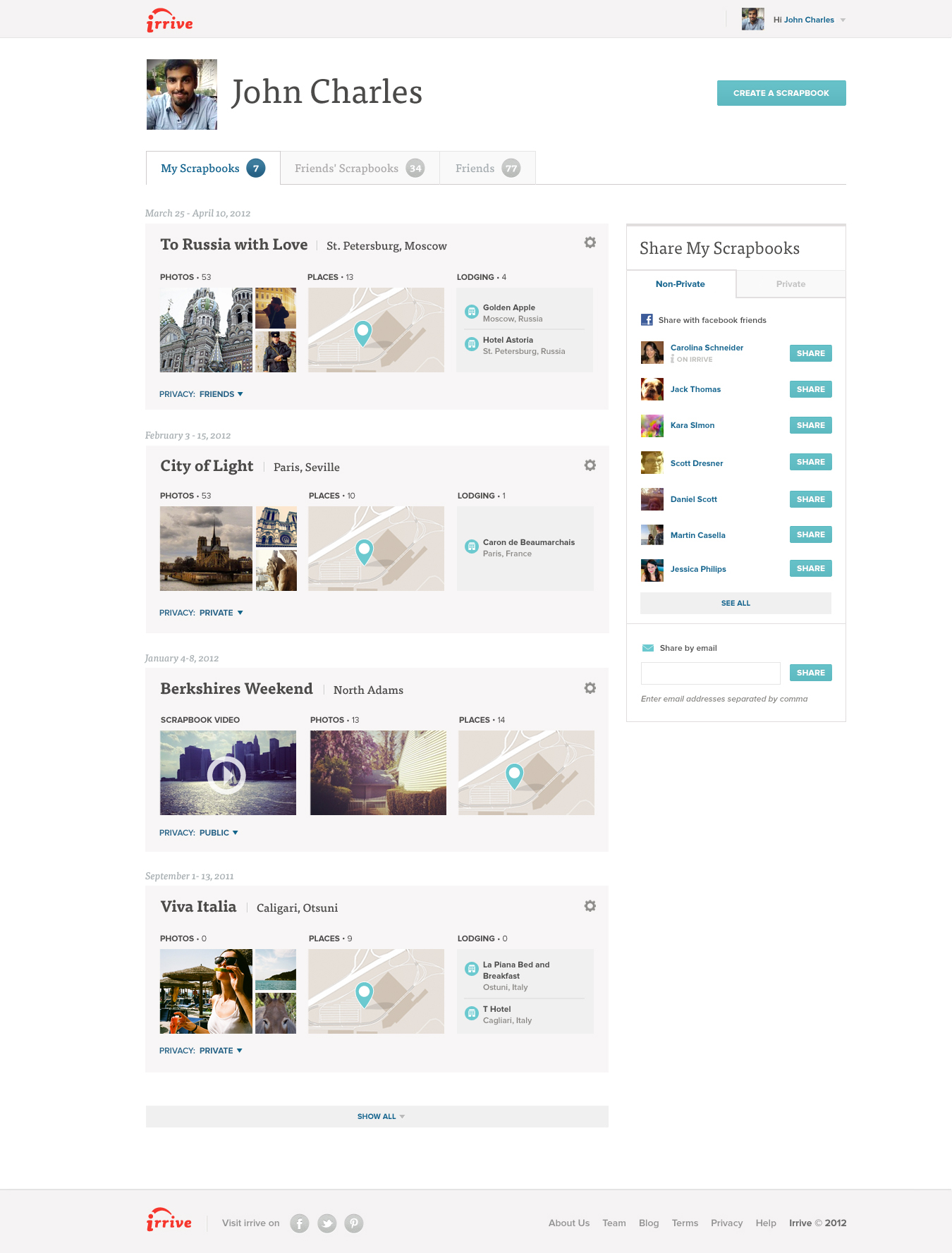 The virtual scrapbooks are created for you automatically after you connect your various social services – in addition to the above, Picasa/Google+ and Dropbox are also under consideration – and provide the dates for the scrapbook. These books can be private to you and those you specifically invite to view them, or you can allow any of your Facebook friends to see them. Those friends can also collaborate alongside you on books for events where multiple friends were in attendance, like weddings or group vacations, for example. You can even set up the scrapbooks in advance of your trip, and have them automatically created on the fly as you post photos and check-ins.

The idea to offer social aggregators is not entirely new. FriendFeed, Google Buzz and others have tried to do this on more of a “firehose” level, but now several startups are attempting to better organize the streams of content in new ways. Companies like Quilt, Memolane, and others, are doing much of the same (as did Erly pre-acquisition), but Irrive differentiates itself not only through the user interface, but also because it doesn’t require you to use social networks at all – you can upload photos and other items manually, if you choose.

But what happens to all your memories when Irrive is acquired or shut down, I wanted to know? Cohn says that they’re working to offer automatically created videos of your memories, via Animoto. But Animoto is just another startup! Well, they’re considering offering printed scrapbooks later on too, Cohn says. Good.

Irrive will eventually monetize through some premium features, related to the above. For now, it’s free – sign up is here. 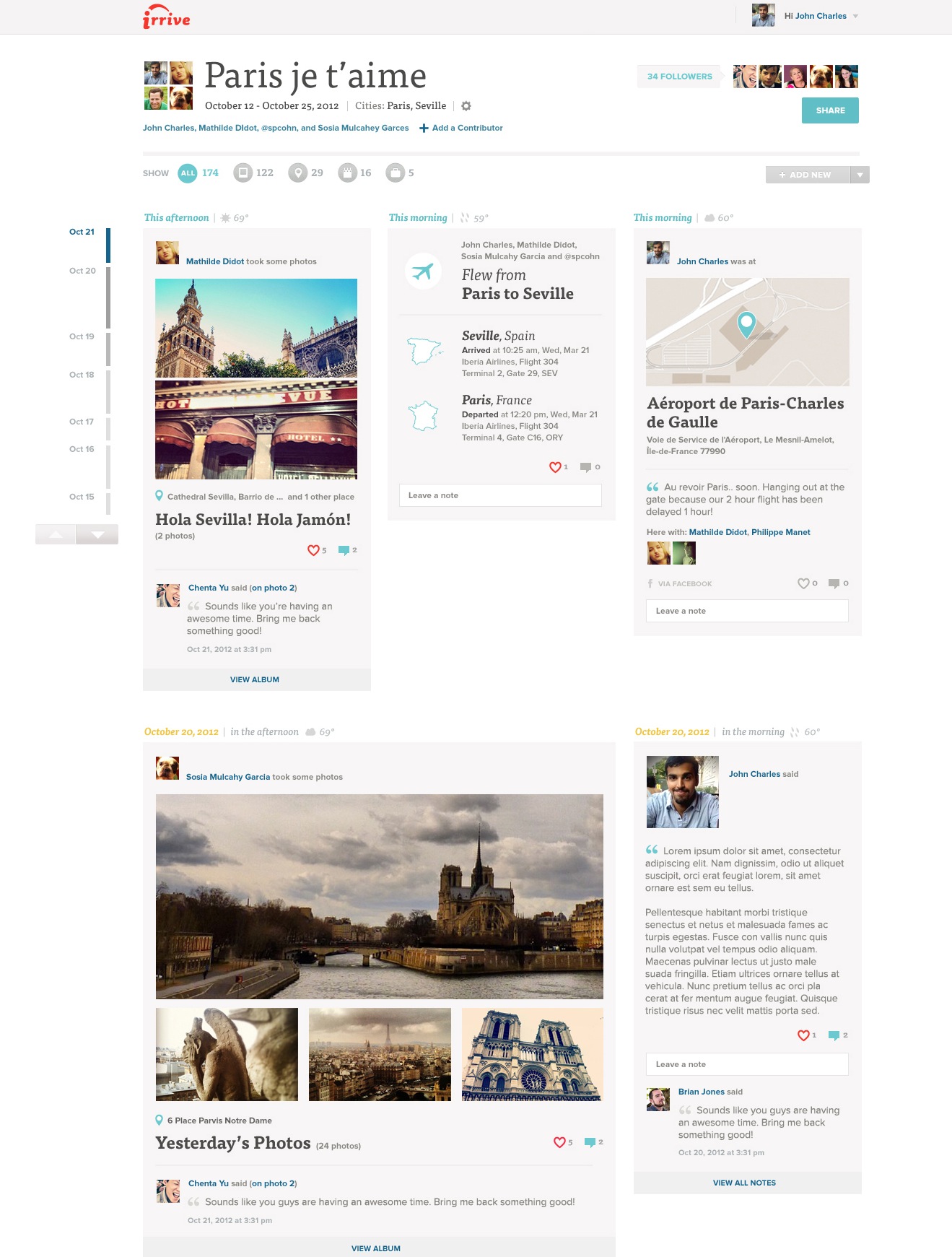