Earlier this month, Jordan mentioned Astrid in her list of must-have back-to-school apps. For those not familiar with Astrid, it was one of the first task and list management apps to show up on the Android Market back in 2008, where it has since become a stalwart. The app later jumped over to iPhone, the (mobile) Web and Windows Phone, helping people to complete over 30 million tasks along the way.

Today, Astrid is rounding out its iOS apps with a built-from-the-ground-up iPad app and a whole mess of premium services, like file storage, voice recordings and backup, among others. Astrid was already a solid list service, but its new round of updates bring it some essential features for taskmaster-ing on-the-go.

But more on that in a hot second. First, some quick background. Astrid’s focus from the outset (since it was conceived as a side-project by a Palantir engineer) has been to offer a clean, easy-to-use interface around a simple task-sharing and collaboration service. With Astrid, users can create tasks with deadlines, set priority levels, add tasks to your calendars or to various lists, like your “Home List” or “Work List” or “People To Kill With Kindness List.” The goal of the service was to easily enable groups/businesses assign tasks to people within and broadcast to the group when completed — a bit like a mobile Asana — so users can share grocery lists, reusable checklists for every month, etc.

With its newest app, Astrid brings a now familiar feature set to your iPad. Astrid co-founder Jon Paris tells us that an iPad app has been the most-asked-for “task” on the company’s own to-do list, but they didn’t want to simply port the iPhone app, so they designed it from the ground-up. That sounds like fluff, but you can see what he means in the user experience. The free app works as a standalone to-do list and syncs with the startup’s web and iOS apps and takes full advantage of gestural control and your device’s accelerometer. 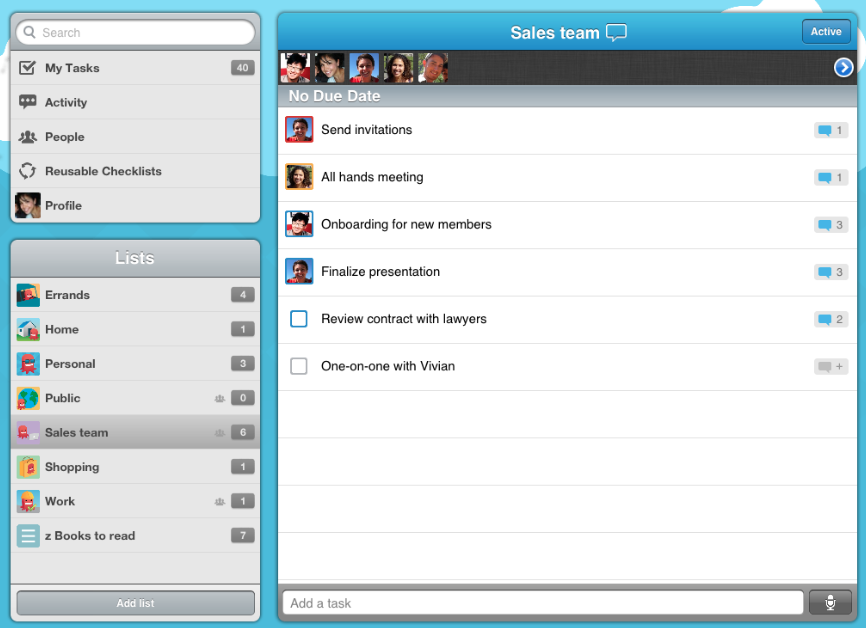 Users can swipe right on a task to postpone by a week, swipe left on a task to delete, shake the device to return to the home screen, swipe from the bottom edge to open a task bar, along with similar functionality in “task edit” view.

While Astrid has been steadily building out the usability and functionality of its service, it’s been somewhat unclear how the startup eventually planned to scale the dreaded Monetization Mountain. Back in February, the startup added TaskRabbit integration to let users outsource parts of their to-do lists to the on-demand network and integrated Google and Amazon search for a little lead-generation.

These were smart (and relatively cool) features, but today the startup launched a more realistic and potentially more sustainable approach to monetization: Premium services. And thankfully, they’re not just slap-dash features thrown together to make a buck on the “premium label,” these are things that will actually bring a boost to your productivity on iOS devices.

The premium service will cost $4.99/month or $39.99/year via in-app purchase and offers file storage so users can attach files from iOS or from the web app with drag-and-drop uploading (anyone who’s shared on the task list can view the files, Premium subscriber or not), voice recording so that users can attach voice notes to tasks and automatic voice backup. This last bit is pretty helpful given the unpredictability of speech-to-text, especially when you’re moving, as the app saves a recording of your voice and attaches it to the task whenever you open voice dictation in the app. 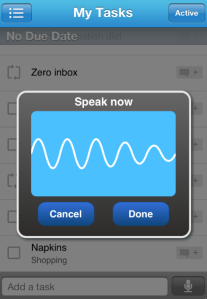 How often do you think of something you need to do while you’re on the move or away from your computer and don’t have time to jot or type it down? For me, it happens surprisingly often. Voice dictation and backup obviously solves a huge problem there and it’s great when lives inside a list and management service. Will be especially great until Siri gets her act together.

The premium subscription also adds a pro dashboard with interactive charts, custom filters and web themes, which come in handy when you want to track progress on personal or team projects or edit groups of tasks simultaneously.

All in all, some solid updates for Astrid, as it continues to push forward.