Ever since Y Combinator co-founder Paul Graham called for startups to replace e-mail last March, inboxes have become trendy in the way activity streams were a couple years ago. But for the most part these are activity streams rebranded. 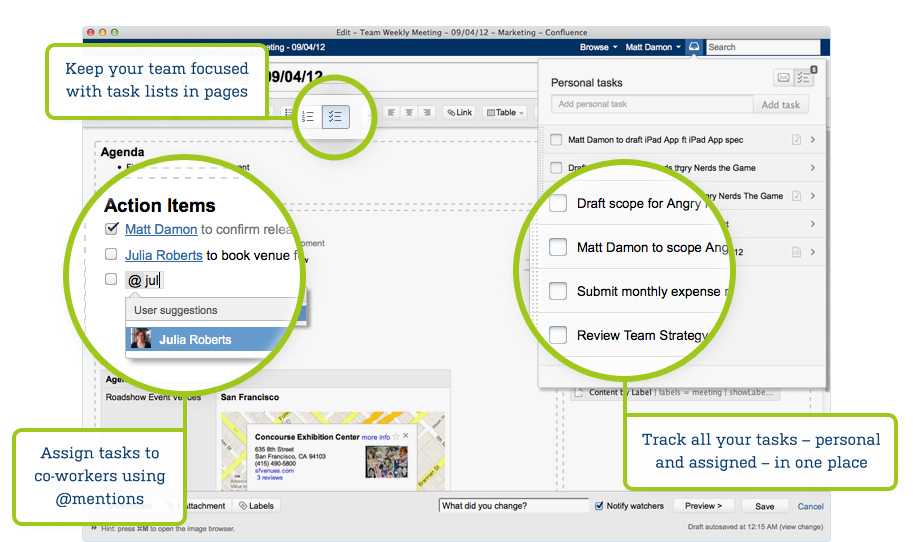 Each of these apps — Confluence, Asana, Yammer and all their competitors — promise to reduce the amount of e-mail people have to send and receive. That’s a nice idea, but they end up creating a lot of these micro-interactions and then you have activity stream overload instead of inbox overload. To make matters worse what you’ve got now is two or more different overloaded inboxes, one for e-mail, and one more for activity streams.

How many of you have basically given up watching all these activity streams and just ended up doing something like turning on an e-mail alert for certain important events?

Confluence’s mashup of activity streams and task management is a noble experiment, but I expect it will only work out well for companies where most employees already spend a lot of time in Confluence. Confluence product marketing lead Matt Hodges says the plan is for Confluence to become the central hub for all employees of its customers. That’s all well and good, but that’s basically what every one of these newish enterprise collaboration companies is trying to do.

The trouble is that many e-mail clients already have a pretty good task management integration, particularly Microsoft Outlook. E-mail is already the communications hub for many, and I suspect, most knowledge workers. The chronological list of e-mails with a column on the right with tasks and a weekly agenda is a pretty tough bit of UI to beat. Companies like Harmon.ie recognize this and try to bring collaboration features back into e-mail instead of reinventing the groupware wheel that started with Lotus Notes way back in 1989. Qontext is trying to make it possible to embed an activity stream into any application, and Yammer is starting down this route as well (at the very least I expect it to integrate with Office now that it’s been acquired by Microsoft).

It still makes a lot more sense to embed activity streams into e-mail clients or other applications than to try to force all employees to juggle yet another app. If you’re killing e-mail, how many people do you know who carry around a phone AND a two-way pager? And how many just carry a phone but send more text messages than they make voice calls? If you want to kill e-mail, do it from within.