Cast your minds back – if you can – to the days when the web was a jumble of random pages. ‘Web surfing’ consisted, quite literally, of somehow finding a website and then clicking through links to other sites as the mood took you. Yes, really. That really was all you could do. Eventually Yahoo! came along to put sites into directories. But it wasn’t really until Google came along that the ‘long tail’ of the the web started to be uncovered. Today it’s 1994 all over again, at least in the world of mobile apps. Despite startups like Zwapp, Appsfire, Yappler, Apptizr, Appolicious and the rest trying their best to surface the long tail of mobile apps, the iTunes store, Google Play and Widows Market remain a chaotic jumble. I’m sure we are all familiar with the experience of literally surfing stores to find what app we want.

It’s in that context that startups are often to build search engines for the app world. Thus it was that app search engine Chomp got acquired by Apple.

Last week a few old Chomp features made their way into the new iOS 6 App Store application. However Apple’s system for organizing applications remains more or less intact (although this is admittedly pre-release software). So the question has to be asked, has Apple missed a trick?

Indeed, many wonder if app search engines are really the best approach. That at least is the contention of Zoe Adamovicz, Matthaus Krzykowski and Marcin Rudolf, the founders of Berlin-based Xyologic.

And they have the language to match their claims.

“Search, as a concept, is obsolete,” says Adamovicz, sitting on a table in a office with a direct view of the Reichstag (pictured).

“Classic search engines assume that the user expresses their intent with a search query. But that’s not the future. The future is applications being built into every device imaginable. Every car, lamppost, doorknob, you name it. But somehow making sense of all that stuff needs to delivered to people. It’s like Alice in Wonderland – we are now down the rabbit hole into a new world. Search engines assume you are looking for information, but the explosion of the app economy is changing all this,” she says.

Oh really? But before we get into that, let’s take a step back and assess whether Xyologic’s claims stand up.

Until recently Xyologic looked like a an apps analytics firm. But that’s not really what it is.

It de-cloaked recently not as an analytics firms but as a mobile app search engine aimed at mainstream users. Games were to be a focus. iOS apps are in the cards next. And they have a large directory now of 700 categories, along with 100 for games alone. Here’s what the interface looks like on the beta: 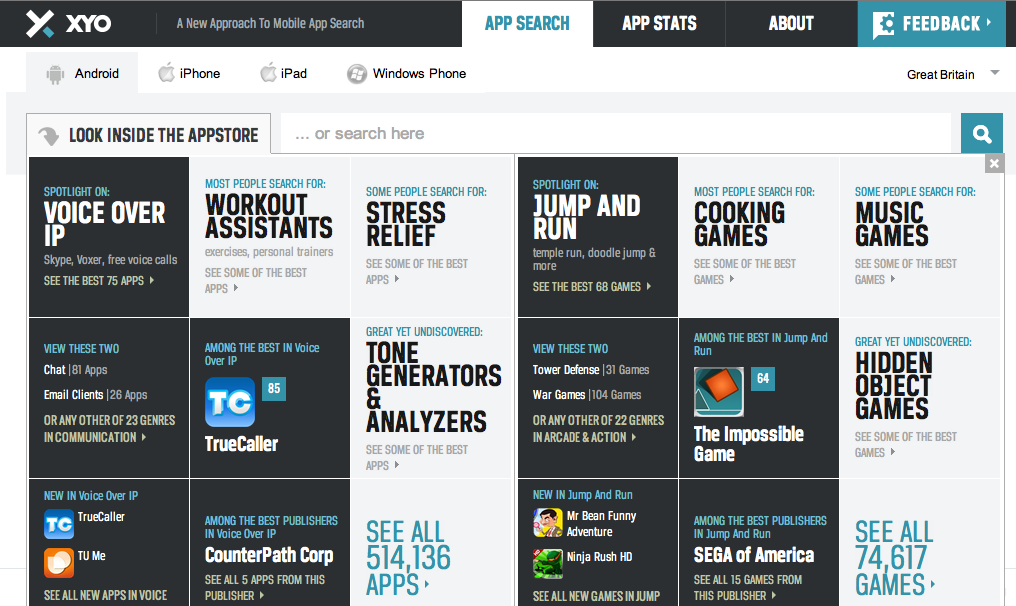 But the signs are that there is still a huge problem to be solved and it’s clear Apple has also realised what a mess the App Store is.

This year Xyo claimed that as many as 60% of iOS applications have never been downloaded.

That figure might sound high, but seems about right given there are 650,000+ iOS applications available. Part of the problem is that ordinary people simply cannot find anything.

And no one can really find anything. About 0.1% of iOS apps get 50% of the downloads. Right now on Android about 30-50% get any traction at all.

It’s a big problem for developers.

But it’s not just a problem for them. VCs are SUPER frustrated with apps stores because it means their invested startups are just getting nowhere.

And it’s Xyologic’s contention that consumers are rarely specify what they want in their searches for apps. So their approach is to turn the most common searches for apps into what amounts to categories that real people use in the real world.

The result, the company says, is a directory that effectively divides up the world of mobile apps into things everyone searches for like fitness apps or things people really want ‘educational games for seven year old boys’. Krzykowski notes that less than 5% of mobile app searches include searches for brands like Zynga or Angry Birds.

After all, what is the search query that returns Angry Birds? “Shooting pigs”? Throwing birds”?

People just don’t search on the brand name, which is why you still see offline marketing for apps on the sides of taxis and buses – to get people to search on brand. In fact, over 80% put ‘puzzle games’ or ‘music’ into the search box.

People are searching on Sleep Assistants and Task Lists, not “Business apps”. Not Health and Fitness but “workout assistants” or “Gun games,” says Krzykowski.

It’s that problem Xyo is out to solve, he says. “We never talked about the vision. People have seen us as a data analytics company. But we’ve been bootstrapping. What we’ve really been doing all this time of course of working on discovery and search for mobile apps.”

And he says, Xyo is proof that Berlin can produce not just me-too startups, but core technology companies with patents. “It would be hard to copy this” he says.

For now the product will be about Android, but iOS search is coming. He says they’ve “Had a tonne of interest from the platforms” about what they are doing.

One of the main problems they want to tackle is discovery. Take for instance, when you look at the iTunes store, what you see is a logo, a title and generic categories. But Xyo has found that people just can’t deal with the logos, and the lack of ratings.

Looking at 40 million user ratings per month, they came up with an interface which downgrades app logos, creates many more categories and displays download numbers.

They also display things like ‘people who downloaded this app also downloaded etc’. And this is without any Facebook integration

“We have a closed beta right now, but the early numbers show that we are surfacing the long tail of apps,” he says . “The Holy Grail is also the social aspect on how the social graph connect with app. We have a pretty good idea about app and game interest graphs and looking at how to integrate with social networks.”

Another thing they have found is that apps appearing to be used in Facebook streams just simply do not work that well in terms of increasing virality of the app.

And because Xyo is concentrating on search, not being a store, it won’t have the problems of competing against the sources if its data.

Right now it’s crawling apps for Andorid, Google TV, iOS, Windows and Amazon. And in about a month it will be releasing iOS search.

Adamovicz puts all this into context: “In the old world you were trained to build huge systems. Now you create tiny apps which are interconnected. It used to be a world where a car would run one big piece of software for its engine, but new cars are now running multiple apps. And every piece of hardware is built to be ready for software.”

She points out that industrial design is now geared towards making every object intelligent and interconnected.

“In 5 to 10 years everything you see will be intelligent. If all of it was talking to a user they would be overwhelmed with information. So we will need a completely different concept of discovery and data interrogation,” she says. “If you solve the apps problem you solve the rest.”

This rings true. Guessing your intention – as Google’s business model is built on – becomes different in an apps-driven world. Plus, just socialising apps doesn’t work either as it’s tougher to achieve genuine ‘discovery’ of new stuff.

“Our algorithm goes into the data and spits out what “interests” are possible. It’s only then that we deliver these back to real people. The data inspires the interests,” she says.

So in the future when you walk down the street Xyologic would be translating what all the potential interests all the apps around you would suggests, not purely the apps themselves.

As Adamovicz says: “I mean why the hell is Zynga advertising games on Taxis? It’s stupid! It’s Kalashnikov marketing!” (Let’s take that to mean machine-gun, ‘spray and pray’, marketing…)

It surely is – and it’s clearly a brave new apps-driven world now. 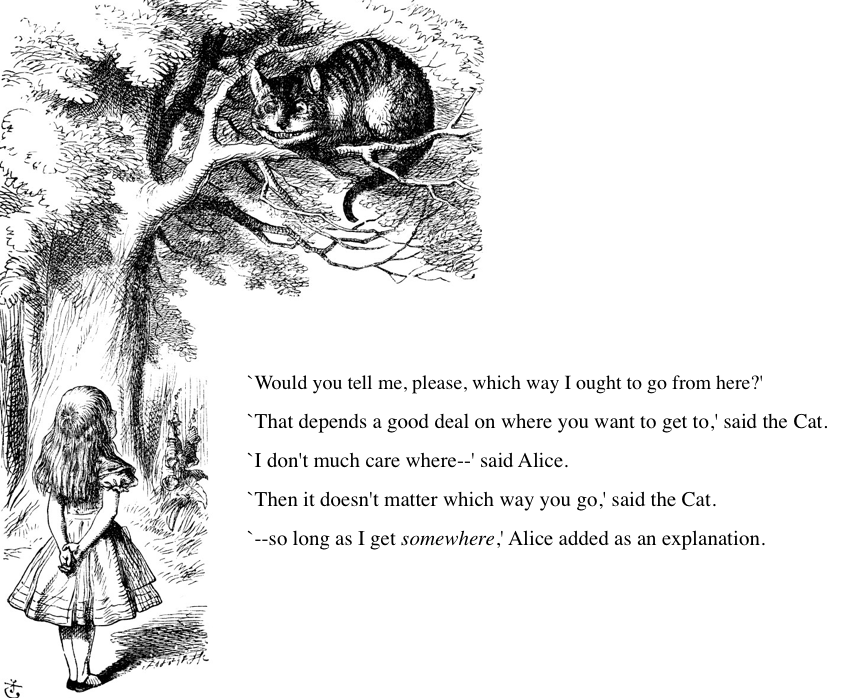