Over the last two years, there’s been a significant increase in the amount of educational media available to the world’s learners, but teachers and parents are hard pressed today to navigate the education content jungle. As a result, curators, algorithms and content analyzers like Learning Registry have popped up to help educators find the best and most effective learning media from the 100K apps on the App Store and the long-list of educational tools available on the Web.

Chalkable, a 500 Startups grad that officially launches today, is offering its own solution to the education content shuffle with a platform that’s part app store and part learning management system. And to help support its launch in 50+ schools at the beginning of the school year, Chalkable is also announcing that it has raised $1.3 million in seed funding from 500 Startups, Expansion Venture Capital, Great Oaks Venture Capital, former Facebook Chief Privacy Officer Chris Kelly, former Facebook mobile platform lead Luke Shepard and a handful of other VCs and angels.

What is Chalkable? We recently covered the funding announcement of eSpark Learning, a startup that crawls and curates the 100K+ apps and eBooks available on the App Store into custom learning profiles and playlists for K-8 students, based on their individual needs. Essentially, it’s a curated, Pandora-like discovery approach to native (iOS) apps. Luke Shepard, who just joined eSpark as CTO, has (beyond investing) also been a mentor to Chalkable.

So, you could think of Chalkable as a web apps-focused sister to eSpark. In other words, ask yourself this question: Where would you go to find one resource on the best Web-based learning tools? The options are few. So, through a web apps store, Chalkable is offering one, aggregated resource for teachers and parents to find web-based learning apps and tools. While the App Store and Google Play offer you the ability to filter by category, purely by offering one place to bring together ed apps already starts to solve a big pain point for the wild, fast-growing world of online education content.

Chalkable’s app store, as with those before it, lists the top education apps from other stores and resources across the Web in one place, allowing users to browse by category (History, Math, Science, etc.) and click-to-buy. The app store offers pre-existing reviews, star-ratings, and lets users chime in with their own.

Now, the chances are that most people are likely far more familiar with education-related native (mobile) apps and while it’s true that schools are adopting iPads in droves, focusing on web apps expands the playing field and gives educators and students access to tools that are accessible across platforms (and devices). It’s a lesson Chalkable learned from Facebook and Google, and talk to the Chalkable founders and they’ll tell you that HTML5-based web apps are the future. 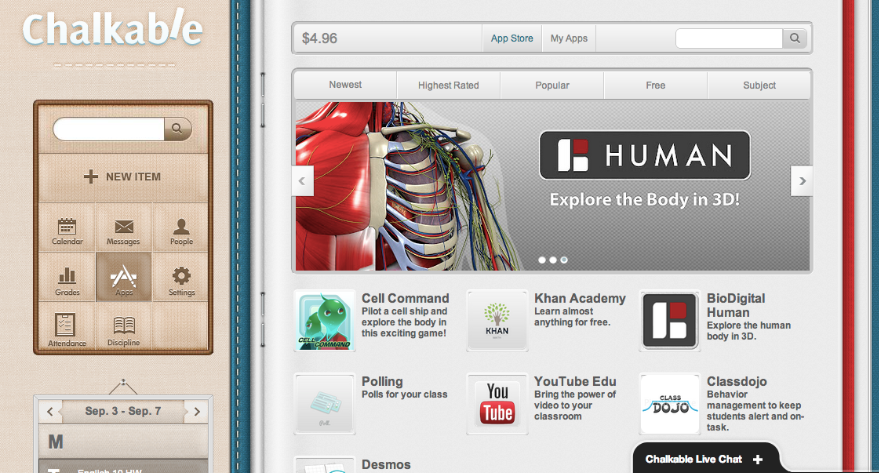 Unfortunately, as it is in the sphere beyond education, web apps just aren’t the same quality as their native bretheren, and a big challenge facing Chalkable going forward is assuring quality in a wide selection of apps. That being said, through a more universal focus on web apps, Chalkable is trying to address some of the limitations mobile devices and their native apps present during use in the classroom.

For example, while schools may be adopting iPads fast and furiously, the fact is many students don’t have their own iPads, so schools distribute them in-class and most content is locked into the device for security, privacy and a number of other reasons. That means kids have to go back to the same iPad every day, but obviously schools may not have an app or device for every student — a problem easily solved by offering web apps.

What’s more, simply building a web app store only goes so far and ignores a lot of the problems inherent to the way teachers and students use, access and pay for learning tools. So, Chalkable is building a platform around its web app store, a basic learning management system that offers teachers, students, admins and parents a number of the same features one might find in the dreaded Blackboard. (Which, along with many other university-focused LMSes, is beginning to turn its attention to offering an only-slightly-moderated alternative to K-12 schools.)

As such (and it’s pretty basic), the platform offers its own, built-in news feed, calendar, grade book, attendance tracking, reporting tools and integration with 10 of the most-used school information systems (or SISes). [More about student information systems and the startups that love them / are making them better in our coverage of Clever and LearnSprout.]

Obviously, education systems are complicated — and archaic — but students and teachers produce a wealth of data using online and mobile learning tools that developers want to access in order to build better apps and more personal, customizable experiences. Tapping into student information systems (which hold a wealth of essential student data, like class lists, etc) is no easy feat. But Chalkable is starting to do so for its own benefit, and it’s also released an API of its own that allows developers to more easily authenticate their student users and let teachers embed parts of web apps in homework assignments, or help teachers assign grades, for example.

To that point, buying native apps for multiple users can be tricky on iPads, so Chalkable is working with schools to integrate their existing payment mechanisms, allowing them to pay for apps with purchase orders (a big must-have for K-12 schools), credit cards, bank transfer or checks.

In terms of cost, Chalkable starts at $10/year for a student account (which includes $5 worth of app purchases built-in to the cost) and varies based on use case: Separate accounts are available for admins, teachers and parents, etc.

Chalkable has a long road ahead in fighting off app stores and other LMS players, but with low cost, ease of use, APIs, and some basic LMS tools built around making online education content available in one place (with focused search and discovery tools), it’s off to a good start. 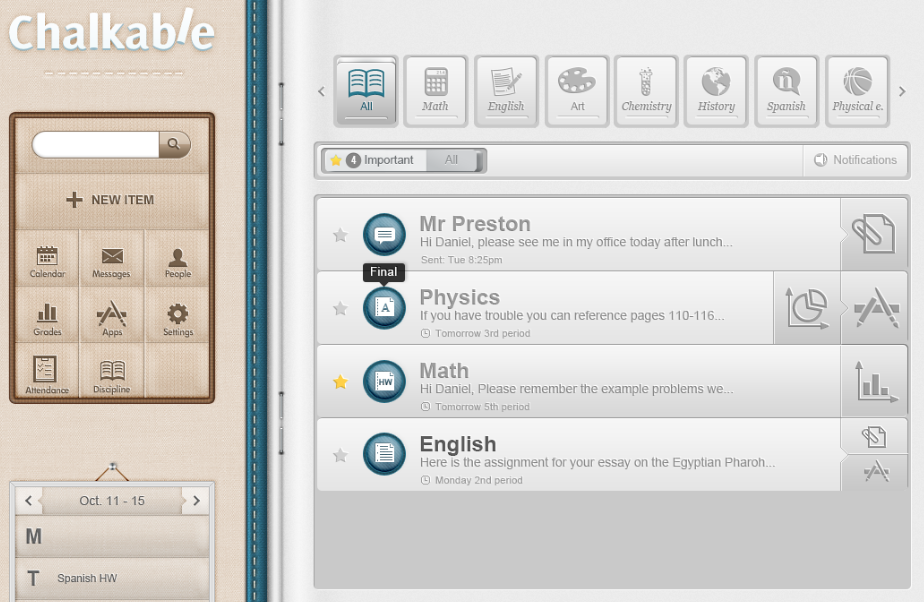