Swarmly, a newly-released app for iPhone, thinks it’s seen a gap in the location sharing market. Unlike check-in apps like Foursquare or indeed Facebook’s own location sharing feature, it places far less emphasis on the social graph to focus on anonymous, aggregate location data — powered by each Swarmly user’s whereabouts — so that the app can tell you where is hot (or not) right now.

Think of it as similar to Waze’s crowdsourced traffic data but for people. That’s the ambition, anyway. But first it needs a ton of users to be anything close to useful — a challenge that far too many, otherwise, good ideas face.

Its heavy reliance on network-effects, aside, Swarmly is an interesting proposition. The app, though only at version one, is already pretty polished too, with a narrow enough focus to result in a refreshingly intuitive User Experience. 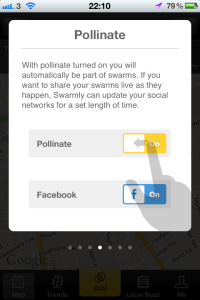 To start sharing their location — anonymously and, optionally, on Facebook — users simply toggle the ‘pollinate’ functionality so that their whereabouts will begin contributing to any nearby ‘swarms’, which are tied to specific locations in Swarmly’s database (based on the varying accuracy of GPS/WiFi positioning, of course). Those swarms then appear on a map, giving a quick real-time overview of where the action is at or where it isn’t. In addition, users can tag swarms to add more social data to locations, a nice and simple form of curation.

“We were always frustrated that whenever it came to location there was always a million ways to find out what’s nearby, but nothing to tell you what’s good nearby, right now”, says Swarmly co-founder Marco De Nichilo.

“If you are out and about, the last thing you want to do is start searching on a phone to find out what’s happening. The phone should tell us. We decided that the best way of finding the live social hotspots was simply to discover where had the most people and the most buzz.” 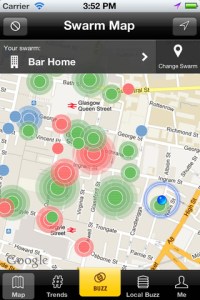 Or to put it another way, Swarmly offers “traffic information for people instead of cars”, says De Nichilo. Real-world applications for the sharing of this type of aggregate location data might include knowing when is best to go shopping or to visit the cinema, or what days or times the local bars and clubs start getting busy.

De Nichilo says that in the future, additional aggregate and anonymous data might also be surfaced, such as “what bars have more girls than guys in it and vice versa” or what age groups frequent a certain venue.

“People want real-time social data that just isn’t available right now. We want to make it available for users to make informed decisions about where to go.”

That data — though anonymous and in aggregate — is bound to raise a few privacy eyebrows. And it’s for this reason that De Nichilo doesn’t think Swarmly is the type of app or functionality that Facebook or Google would offer, even if they already have the data to do so.

“The issue is all these services tie a who to the where, so there are always privacy concerns. We separate the who from the where and simply note that there are people there. There is a group, there is something going on. And if that something could be of interest to others, it can be tagged and shared.”

It’s a neat idea, but for a two-person startup, currently unfunded (but preparing to seek investment), achieving the required network-effects to make the app useful is a big ask. To that end, De Nichilo says that Swarmly is targeting Universities and students to begin with, including some off-line marketing in the local Glasgow area in Scotland.

“We will be using street PR teams during the freshers season as well as partnering with many of the popular bar and clubs in the area”, he says.

Should Swarmly get the critical mass that it needs — download the app here — the business model is a familiar one: The startup plans to provide real-time offers from local businesses, pitting it against a plethora of other location-based services.