Imagine a mobile phone plan, such as the one from Free in France, with unlimited talk, unlimited SMS and MMS messages, tethering and, even more important, unlimited data with a speed reduction after 3 GB. Usually for that plan in the U.S., you would pay more than $100 for limited data with a two-year contract. In France, it costs $25 per month (€19.99, sales tax included) and there is no contract.

Yet, it is something radically new for French consumers who used to pay between $57 and $82 per month (€45 and €65) for a smartphone plan with only a couple of hours of talk time. The French telecom company Free disrupted the mobile landscape by using very clever technology, marketing and financial tricks. As a company with a hacker culture, Free is a good example of how to execute against well-established competitors.

Free isn’t a newcomer. It was an Internet service provider before becoming an integrated telecom company. On that market, it used technology as its weapon to conquer market shares. In 2002, it was the first French provider to offer a triple play service with DSL Internet, unlimited VoIP calls to French landline phones and television for $38 per month (€29.99).

The company believed so much in its offering that it stayed lean for years. While competitors had to hire a lot of salespersons and spend money on ads, Free created an offering that you could not ignore. That is why the cost per customer acquisition remained very low. Competitors had no choice but to lower their prices, even if it meant lower margins and lower infrastructure investments.

When the market consolidated, only a few Internet service providers remained. The three major companies Orange, SFR and Bouygues Telecom were all integrated telcos that could easily bundle a triple play offer with a mobile phone plan.

In 2009, the French regulatory agency ARCEP decided that three mobile phone providers were not healthy for competition and sold a fourth 3G spectrum license to Free for $302 million (€240 million). Free’s CEO Xavier Niel started hyping French consumers up about how they will revolutionize the mobile phone landscape with truly unlimited offers for a fraction of the price.

Two essential steps were necessary before launching the mobile offering. First, Free revamped its Internet offering by bundling unlimited calls to mobile phones. Retrospectively, it was a communication move as well as a financial move. It allowed Free to increase the price to $45 per month (€35.99) and therefore greatly improve its margins for its millions of customers. It allowed Free to invest in its mobile future thanks to its triple-play margins.

Second, Free signed an expensive roaming deal with Orange for six years. In other words, Free could launch its mobile offering quickly and without doing immoderate infrastructure investments. It only had to comply with ARCEP’s rule to cover at least 30 percent of the French population at launch. It did so cleverly by building cell towers very far apart to speed up the process, even if it meant an inefficient network.

Another unexpected advantage was that Free had the largest hotspot network in the world, according to them. Every triple-play modem was in fact a hotpost. Thanks to the EAP-SIM protocol, smartphones could connect seamlessly to those hotspots. 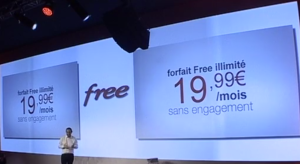 In January 2012, Free unveiled its $25 plan. Niel very aggressively said that competitors squeeze French consumers dry and that their customers were suckers or milk cows.

Finally, the last marketing trick is that Free does not include any discount on mobile phones. It is hard to compare its offering to traditional mobile phone plans from Orange, SFR or Bouygues Telecom. But appearances matter. Competitors had no choice but to do the same. They now all offer a similar plan for $25 to $31 per month (€20 to €25).

After six months, the results are in. Free now has 5.4 percent of market share, that is 3.6 million clients. As the market is mostly saturated, those clients left their previous mobile phone companies.

Maintaining solid growth will be tough for Free as competitors now have similar plans. It still needs to do important investments — especially on its LTE network — if it wants to stay ahead on the technology side. The risk is that investments will slow across the board with lower plans and networks will deteriorate or be late for LTE coverage.

Disrupting the mobile landscape in France was a long process for Free, but thanks to its hacker culture and radical differences from its competitors, it achieved exactly what it planned to do a few years ago.