GiftRocket, a 2011 Y Combinator grad, is a simple P2P digital gifting service that lets users send and receive digital gift cards via email. Originally, the startup was focused around location-based gifting, allowing friends to send each other digital gift cards that could be accessed once they checked-in to a certain location. With some angel funding behind it, the startup pivoted to a more universal use case, becoming a way to easily gift cash within a digital eCard.

Co-founder Kapil Kale tells us that, since that change, people have begun to use the service as a replacement for traditional gift cards and gift certificates and usage has increased as a result. Today, the startup is announcing that it’s profitable thanks to a $2 million in sales in 2012 (and what he expects to be $5 million run rate by December). It’s also making some additions and changes to its service, including an API, bulk orders and reduced fees.

For some background, GiftRocket aims to be an easy way for people to send a cash gift online. The startup’s gifts come packaged with an eCard, a customizable message and a suggestion of where to spend the money. Essentially, it’s the online equivalent of sending a check for a graduation present or giving a greeting card with cash to a friend for the holidays. (It’s also printable.)

The card comes with a suggestion of where/how the recipient should spend the cash, with the benefit of being more flexible than a gift card, as users can spend the money wherever they choose. Users can pay with their credit card or by bank account.

Since launching, Kale says that the average order value has been $75, much higher than the team’s initial expectation. The team, which has now expanded to 5, has also been surprised by one of more popular use cases, in which GiftRocket is being used by businesses and researchers to, say, thank their users for participating in a company survey or customer research.

In line with this, the most-asked for feature by GiftRocket users has been the ability to purchase GiftRockets in bulk or programmatically. So, the team has built out a bulk order system and API (which is launching today) to give the social game companies, marketing firms, survey companies and universities a frictionless way to reward their customers — en masse. 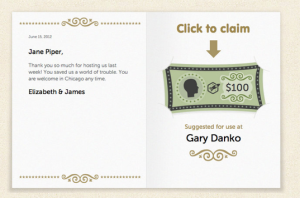 The startup is also reducing its fees to $2 per gift under $100 for those who pay with their bank account, something repeat users have begun to do with more frequency, the co-founder says.

Up next, the startup is hoping to continue to scale through increased marketing, strategic company partnerships and is looking to add more API integrations and build out a white-label product with which third-parties can integrate.

Over the last year, we’ve seen a number of startup acquisitions in the gifting space (and consolidation), including OpenTable’s purchase of Treatful last year, Facebook buying Karma for $80 million and Blackhawk acquiring Cardpool for $44 million. Then there’s also Wrapp, which is primarily focused on Facebook gifting.

Although Karma’s acquisition may have seemed to spell bad news for Wrapp, Kale is optimistic even though the space is crowded because it’s another clear sign that established companies are taking steps to better monetize (and reward) their user base. And what better way than a simple, digital gift card that users can redeem anywhere? (If you’re not the someecards type.)

GiftRocket opened doors when it shifted to a more universal use case, although it still faces competition from PayPal (via its Send Money app) and more and will need to continue beefing up its partnerships, API and affiliated services if it hopes to build a truly defensible business.