Gone are the days of HP’s TouchPad and Palm ambitions, but HP is moving ahead with its plans to make webOS, it beleaguered mobile operating system, live on as open-source supported platform. Today it’s launching the beta release.

The news is getting announced in a blog post: “It has taken a lot of hard work, long hours and weekend sacrifices by our engineering team to deliver on our promise and we have accomplished this goal,” the developers write on the site devoid of any HP branding. The plans to take webOS open source were first announced eight months ago.

Since then there have been a lot of hand-wringing about what HP did wrong (this Verge post sums a lot of it up well) with webOS and whether the open version has any future. There has been a lot of speculation about what devices might be built on webOS, but nothing concrete announced.

But to the future. The release will have 54 components available as open source, the blog says, some 450,000 lines of code under the Apache 2.0 license.

It will provide two different build environments: a desktop build and an OpenEmbedded build.

The desktop build, the post says, will “provides the ideal development environment for enhancing the webOS user experience with new features and integrating state of the art open source technologies. Developers can now use all their desktop tools on powerful development machines.”

The OpenEmbedded build “provides the ideal development environment for porting webOS to new and existing devices.” Perhaps this will usher in some announcements on that point.

The source code for webOS is linked on the site and is here on Github.

This follows on from the Enyo 2.0 release in July. open webOS calls Enyo its “sister open source project.” Enyo is a cross-platform JavaScript framework for app development.

Eight months ago we announced our ambitious plan to make webOS available under an open source license and bring the innovation of the webOS platform to the open source community. We are proud to have hit another milestone with today’s Beta release.

We delivered on our promise

It has taken a lot of hard work, long hours and weekend sacrifices by our engineering team to deliver on our promise and we have accomplished this goal.

The Beta release is comprised of 54 webOS components available as opensource. This brings over 450,000 lines of code released under the Apache 2.0 license, which is one of the most liberal and accepted in the open source community.

Today’s release provides— not one— but two build environments.

Our desktop build provides the ideal development environment for enhancing the webOS user experience with new features and integrating state of the art open source technologies. Developers can now use all their desktop tools on powerful development machines.

Our OpenEmbedded build provides the ideal development environment for porting webOS to new and existing devices.

OpenEmbedded was a natural choice for many reasons:

The build provides an ARM emulator, running core services such as db8 and node.js.We are actively converging on an OE Core image which boots to System Manager and the full webOS experience.

The desktop build brings together all of the elements released so far on the Ubuntu desktop. Our upleveled System Manager now has support for applications, including the Core Applications such as Calendar and Contacts, with their underlying Synergy services. What’s more, many 3rd party Enyo apps are supported too.

No Beta release would be complete without a full complement of ways for the community to contribute and engage with us.  Come join the community to discuss porting, features and fixes on our mailing lists. You can also submit and track bugs and feature requests in our public Jira system.

Finally, you spoke, and we listened. We have enlisted feedback from the community and have selected an approach to contributions inspired by the popular Linux Certificate of Origin.

Great collaboration continues on the Community Edition with the release of LunaCE. The webOS-Ports team have combined the community efforts into one package and made it simple to install on to TouchPad devices through their Preware software.

The latest release brings a host of new features including new Gestures and Card Stack Tabs.

As we work with the community to deliver innovation to the webOS platform, we will highlight and promote the most innovative and noteworthy contributions. Let us know of your breakthroughs and where you might need help. We have the specialists to assist.

Be part of our growth

We are continuing our hiring drive. Some great people have come on board and we are looking to add even more. Head on over to our jobs page for a full list of open positions.

Stay tuned for more updates from us, with the September release we will announce our future plans for Open webOS.

Show me the money!

So what does it look like? Below is a screen shot of the Open webOS Beta running on a Ubuntu desktop. The screen shot shows the iconic card view of the system running multiple applications. 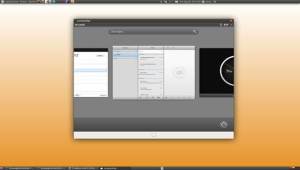 The excitement continues to build as we approach 1.0 and beyond. Looking forward to hearing from and see you online in the community.

Klint Finley contributed to this report.