Native app usage has been edging just ahead of mobile web usage among U.S. smartphone owners in the last few months, but when it comes to the category of travel, mobile web use all but disappears from the map. According to figures out today from Nielsen, 95% of all mobile traffic for travel-related content comes from native mobile apps — specifically on iOS and Android platforms. Mobile web — and traffic on operating systems that are not Android and iOS, for that matter — accounts for only 5% of visits.

And just as Google has come to dominate search, it looks to be carving out a similar position in travel, a mobile-friendly category by its nature: Google Maps — in its combined native app and mobile web forms — accounted for 78% of all time spent in the travel category in June 2012, with a total of 78 million app users, and another 17 million on mobile web. It will be interesting to see how that transforms as Apple drops Google Maps in favor of its own mapping service in iOS 6.

As you can see in the tables below, the next-closest mobile travel players behind Google Maps are pretty far behind: it’s Gas Buddy at 9 million users in apps, and TripAdvisor in mobile web, with a unique audience of 4 million.

And thanks in part to Android being the most popular operating system among smartphone users, other Google travel apps fared well too: Street View and Google Earth also made the top 10 lists in the app category. Other sites like Urbanspoon use the Google Maps API to provide location data for its bar and restaurant listings — giving Google even more ubiquity in the category even when it’s not the main brand. Apple’s new mapping partner Waze scrapes in at the top-10 with just over 2 million uniques — again, a number that could change a lot with the introduction of Apple’s new operating system.

Maps and navigation are for the moment proving to be the “killer app” among all travel companies. Seven out of the top 10 travel apps are primarily based around mapping services (and number-two in Nielsen’s list, GasBuddy, is a kind of mapping service with a special aim, helping you find cheap fuel, so you might even say eight). Mapping apps account for 98% of all mobile travel usage, says Nielsen. 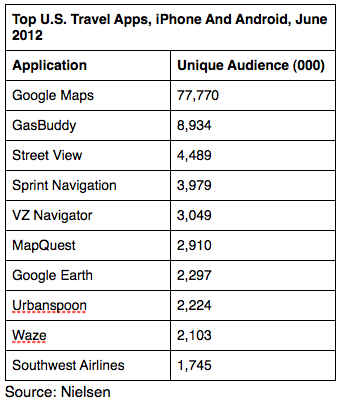 But that’s not to say that other kinds of apps are not also doing well, if in a longtail way. In the overall “travel” category, apps for airlines like Southwest and travel planning aggregators like Priceline.com and Tripadvisor, which bring together different services and multiple smaller players, sit alongside more pure mapping apps in Nielsen’s top-10 lists. These non-mapping apps especially got good traction among mobile web users, where mapping apps took only two of the top 10 slots (but remember, mobile web is still accounting for a much smaller portion of overall mobile travel traffic). 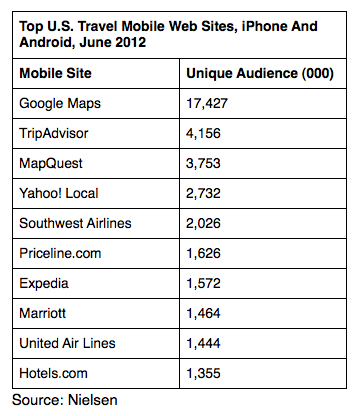 Indeed, Nielsen notes that some travel sub-categories, like Cruise Lines, are accessed “exclusively” through the mobile web. And that’s not for a lack of cruise apps in places like Apple’s App Store. Ground Transportation has a similar lean to mobile web (hear that, Uber?). The most balanced sub-category was travel destinations/theme parks: this group saw 54% of time spent in apps with 46% on mobile web. The full table breakdown is embedded below.

Nielsen concludes that consumers these days prefer apps for mapping, and mobile web for planning. But it also plays devil’s advocate with another interpretation: this could be a sign that there is a market for more (or perhaps just better) travel apps:

“The variation in time spent across the different travel categories shows that there’s significant room for app development and growth,” writes Nichole Henderson, a senior research executive at Nielsen. And in my opinion, the converse also holds true (and not just for travel services): the world needs much better mobile web experiences if developers want those to command the same kind of usage as apps do at the moment.

While those top 10 lists hit at a lot of different categories — aggregators, hotel and flight bookings, mapping and local listings — what seems to not be doing quite so well is the newer category of “social travel” sites. That is, services like Gogobot based around linking with your social graph for recommendations and more have yet to crack the top 10.

However, there are already some sites, like Urbanspoon, which have integrated Facebook Connect so that you can see what your FB friends might think of a particular place. This could spell an opportunity for a social travel company to own this space — either that, or it could be that people are simply not interested in having Facebook-style interactions when it comes to getting from point A to B.

Update: A reader asks, So what about Yelp? It’s a good question and here’s Nielsen’s response:

“This report includes only apps ranked in the Travel category, which is closely matched to how they appear in the App stores, based on their primary content rather than any features. Yelp is included in a different category for Local Guides/Directories apps/websites [as is YellowBook, etc].  Likewise Foursquare is included in another category for Social Networking apps.” Hence that social network, popular with people on the move, also absent from the list. 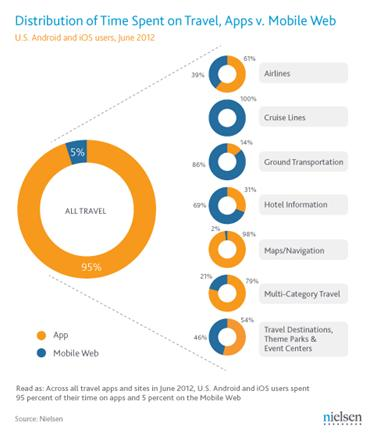