Well, a new social and collaborative to-do list application from former Digg, Blip.fm and Rackspace engineers, is officially launching today on iPhone, web and mobile web. But according to ex-Digg engineer and Well CEO Arin Sarkissian, the focus for the application isn’t only on typical “to-dos” which is why the app’s name doesn’t include “to-do” in its title. Instead, the idea for Well is to serve as a repository for any type of list, whether that’s books to read, movies to see, things you like or don’t like, or even a collection of things you may be comparing in advance of a future purchase. 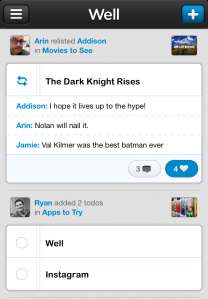 This loose idea surrounding list-making is one of the things that makes Well intriguing, because its structure is that which doesn’t necessarily require the usual checklist of things that have to be accomplished within a given timeframe. However, for today’s launch, the nomenclature of “to dos” is present in the app, but the team is going to see where the community takes things going forward.

Already, we’ve spotted some very non-traditional lists, including lists of bowling balls someone likes, apps someone hates, and even an uh…let’s just call it a list of attractive people. (I’m not going to repeat that list’s title in polite company here. Arin admits that there may be some need for having the service itself automatically set some lists to private in the future!)

Making lists within Well is simple. Currently, the app doesn’t pull data in using APIs and third-party sources, but rather offers the ability to create basic text-based entries for each item entered. However, that’s not to say the app doesn’t have a visually inspiring layout. The lead image for each list is either selected from a database of attractive stock photos, or can be added via the phone’s camera roll or Instagram. When browsing through the app, the photos give what’s normally a boring thing – a to-do list – a more visual, and therefore more inspirational, look-and-feel. 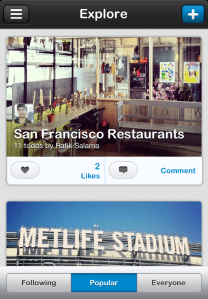 There’s a social element to Well, too. Using a Twitter-like model, friends can find and follow each other and make suggestions which can be added to each other’s lists. For example, a list about a “trip to NYC” might see incoming suggestions about restaurants to try or places to sh0p. Users can control which of these items are accepted (that is, added) to their own list. They can also proactively reach out to others to collaborate on lists, like a list of things to buy for their home, which may be shared with their partner.

Like Pinterest, users on the app can check out their friends’ lists and those that are public and “relist” (the equivalent of the Pinterest re-pin) items they like back to lists of their own. And I have to add that I’m personally thrilled with the detailed level of customization the app offers in terms of email and push notifications. It’s really granular. (App developers, this is how it should be done).

For now, the app is only available on the web and iPhone, but Android users can participate through the mobile web experience. Unfortunately, that will remain the case for the near future – the team is more focused on general improvements, including ways to better highlight trending list items, than it is on going cross-platform right now.  Eventually, the goal is to connect the items being listed – the purchase intent – with services that can help users complete those tasks.

The San Mateo-based startup is currently a team of five with three ex-Digg engineers as co-founders. (The full team includes Arin Sarkissian, Mike Mayo, Jamie Lottering, Ryan Downing, and Addison Kowalski). Arin says he was inspired to create Well following his time with Digg, as his position there had previously allowed him a high level of visibility into what his engineering team was up to. Later, he pondered, “why don’t I know all the stuff my friends want to do?” Hence, Well.

You can grab Well for iPhone here or sign up here to use it via the web instead.