A new startup called Late Labs wants to connect coders with worthwhile side projects, and to reward them for their work with startup equity. The company lays out the problem on its mission page: “For Hustlers, its hard to find Hackers.  For Hackers, side projects lose traction in the design & distribution phrase, and fizzle . . . out.”

So if you’re a developer looking for a side project, you can go to the Late Labs site and browse the menu of projects that are currently in development. If you decide to participate, you sign up to complete specific coding tasks, and each of those tasks earns you equity in the project. (You’ll get a contract laying out the details before you start.) To manage the actual code submission, the company integrates with code repository GitHub. Ultimately, the successful projects should spin out as standalone startups, and your equity means that you’ll be rewarded if that startup has a successful exit. (Plus, when it comes to recruiting co-founders and employees, the developers who built the initial product would be an obvious starting point.)

Late Labs plans to take a very hands-on role in the process. Users can submit their own ideas, but the company will determine which of those ideas actually become Late Labs projects. (The idea alone gets you 5 percent equity.) Late Labs also plans to handle all of the design work. And every project will be overseen by a “developer evangelist,” who is either a full-time company employee or a contractor on the company payroll. 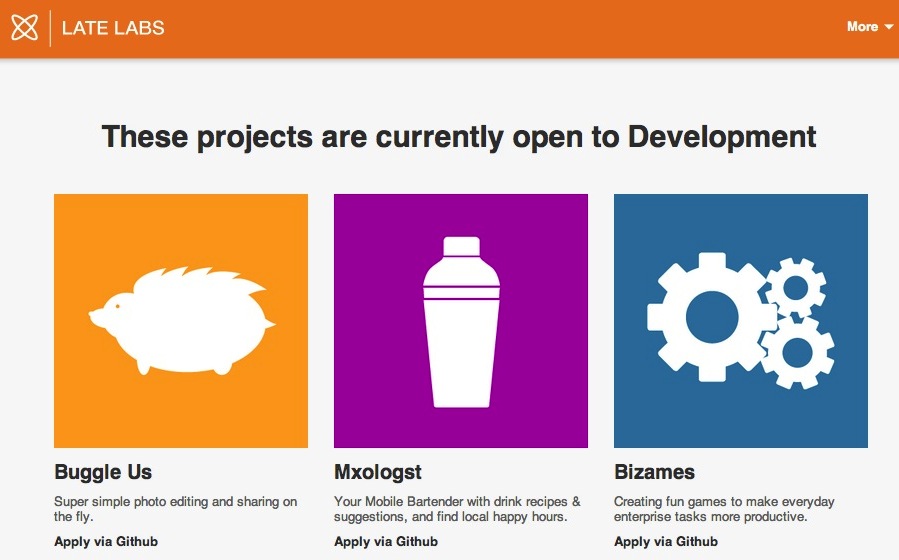 Founder Justin Elof Johnson emphasizes that this isn’t for folks who want to run a startup but outsource the development. “It’s not like a 99 designs for coding,” he says — because again, Late Labs will be running the process, not the idea originator. However, he suggests that many people have product ideas that they’re never going to do anything with, the kind of thing where you think, “Boy, it’d be really cool if …” but then you shrug and move on. Late Labs could help make the best of those ideas a reality. (The concept is similar to “social ideation” startup Ahhha, though the execution is pretty different — for starters, Late Labs is specifically focused on recruiting coders, while Ahhha is trying to crowdsource the entire product development process.)

When Johnson showed me the site, I had one big question: Given the failure rate of most startups, is it really likely that the equity in many of these projects will be worth anything at all? Especially given the large number of talent acquisitions, which are more about hiring a team than acquiring a product?

Johnson admits that it’s a risk, but one he’s hoping to reduce by focusing on products that have clear potential to earn revenue and build community — so that they’ll be more valuable to potential acquirers. At the same time, he says he’s willing to experiment with other compensation systems down the line, such as revenue sharing.

Projects currently being considered by Late Labs include Mxologist, a mobile bartending app; Thrift, an app for photographing and selling the old clothes in your closet; and Peach Fizz, a social music app. Johnson says the company will probably focus on one project initially (to be determined by developer interest), in part to work out the kinks in the model, before getting more ambitious.