For all the content that’s going online, users still watch a ton of TV content on, you know, TV. But today’s program grids still leave a lot to be desired, which is why TV Guide is offering up a new way for users to keep track of their favorite TV shows and discover new ones, with a new iOS app launching today.

The new app is designed to help users find the shows that they’re most interested in, and share them with friends. At the center of the new product is Watchlist, which lets users tag shows they’d like to watch and then provide notifications and updates whenever those shows air live or when they’re available through video-on-demand services. It also makes them easier to find on streaming services that have their own iPad apps, like ABC, ABC Family, CW, Hulu Plus, HBO GO, MAX GO, Crackle and iTunes.

The Watchlist is already a feature on TVGuide.com, where the company has 500,000 users already keeping track of their favorite shows. The introduction of the feature on its iOS app means that users will be able to transfer Watchlists between platforms, accessing them either through their computer’s web browser or the mobile or tablet apps. Considering the website gets 25 million uniques per month and the apps have been downloaded more than 7 million times, that could spur greater engagement for both. 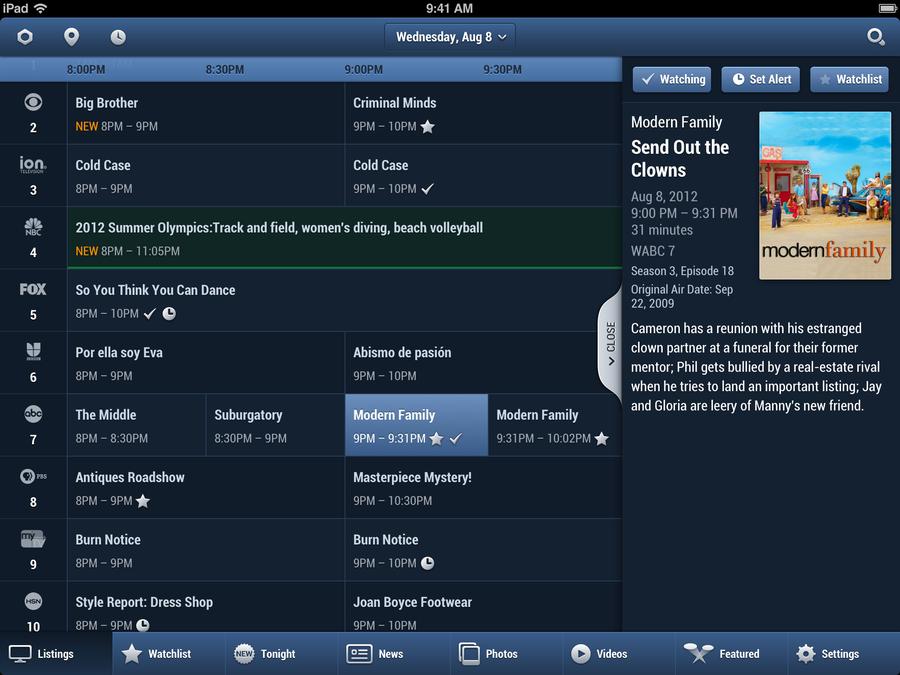 In addition, the TV Guide app provides a way for users to find out which shows are popular. It’s Tonight Trending feature shows a list of hot shows based on what TV Guide users are watching. There’s also a way for users to check-in and discuss shows they’re watching. The whole thing is pulled together with lots of original editorial content, including breaking news and feature stories, that no one else has.

While a lot of the focus has been on the consumer experience, the new TV Guide app also has some benefit for advertisers. TV Guide has created opportunities for new ad units that go beyond just banners, including video showcases, branded content, and even sponsorships for its “Add to Watchlist” button.

Frankly, video discovery is a big, fragmented market and there’s a ton of companies trying to help consumers find the stuff they want to watch. That includes startups like Zeebox and GetGlue, as well as big-time distributors like Comcast, which are coming up with their own apps for subscribers to find TV content. But TV Guide has the TV Guide brand, and the app seems pretty cool, so it shouldn’t do too badly, right?