Tagwhat tries to connect online content to real-world locations, and it’s taking that idea step further with a new feature that it calls the Superslider.

Co-founder and CEO Dave Elchoness says that there’s an enormous amount of content on the web that’s related to location but not geotagged — which means that you might completely miss the relevance of a neighborhood or building as you pass through. For example, if you’re traveling to New York and you walk past Katz’s Deli, you might miss out on the fact that it’s the setting for the famous “I’ll have what she’s having” scene in When Harry Met Sally. In fact, I’ve been inside the deli several times without knowing that. (I did watch my friends eat a particularly disgusting meal there, so it wasn’t a total loss.)

To solve that problem, Tagwhat has created a collection of geotagged content (the content is either written by the Tagwhat team and the community, or it’s pulled from publishing partners and open sources like Wikipedia) that you can browse on your iPhone or Android. When you open the app, you’re presented with a selection of notable nearby locations — this afternoon I tried it out from the TechCrunch office, and I was able to read a description of The Creamery coffee shop and the Wikipedia article on the 4th and King Caltrain station. You can narrow search to specific channels like “movies” and “Wikipedia,” and you can also bring up a map and directions for each entry.

The Superslider adds a social layer to the experience. After all, if you’re interested in reading about a spot, you may also be interested in seeing who else has checked in there, or who’s tweeting about it. And that’s what the Superslider allows — it’s a slider that you can bring up beneath any Tagwhat entry, allowing you to browse and post related content to Facebook, Foursquare, and Twitter. The algorithm matching locations to social content works well, but it’s not infallible — when I opened the Superslider for the Creamery, I saw the Creamery’s Facebook page (great!), but most all of the tweets were actually related to other locations, like Cold Stone Creamery (less so). 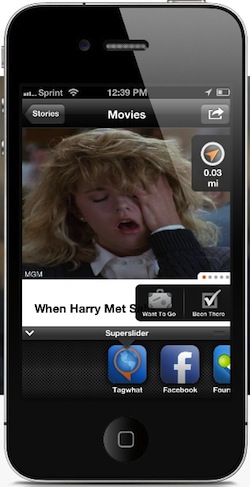 Elchoness says the Superslider will expand over time to include other apps — not just social ones, either. You might be walking past AT&T Park and the Supderslider could bring up the ESPN app showing the latest scores. Ultimately, Elchoness says Tagwhat could become an “app of apps.”

“A lot of folks have been thinking about mobile in the wrong way,” he says. “It needs to be simple and easy to use. No one’s going to be hopping to lots of different apps for very long.”

In addition to the Superslider, Tagwhat has also added a travel log feature, allowing users to mark locations as “been there” and “want to go”, essentially saving those entries in a list for future browsing.

By the way, if the name sounds familiar, it’s because we wrote about Tagwhat back when it was focusing on augmented reality, before the launch of its current apps. You can download the Tagwhat iPhone app here and the Android app here.