StartX, the startup accelerator for Stanford students, has raised its first big piece of funding — an $800,000 grant from the Ewing Marion Kauffman Foundation.

Under the name SSE Labs, StartX first launched in 2010. Since then, 240 founders launching 90 companies have participate. The accelerator says that 85 percent of its companies attract institutional or angel funding within three months of joining. StartX has also recently graduated the first class from its industry-specific track, StartX Med (a six-month program that follows the StartX template, but with training tailored to biotech and medical startups).

It sounds like the program is definitely attracting attention in the Stanford community — StartX says that more than 6 percent of the student population applies. Officially, you need to be a Stanford student or recent graduate to join, but the accelerator has also been admitting a few faculty members, too.

The program’s staff has grown to 20 (many of them part time), and there’s a network of 300 mentors and advisors.  Until now, however, StartX hasn’t had much money, sustaining itself on donations and small grants. So to a certain extent, the Kauffman grant will just be used to fund and improve the existing operations — for one thing, founder and senior managing director Cameron Teitelman can finally start taking a regular paycheck. 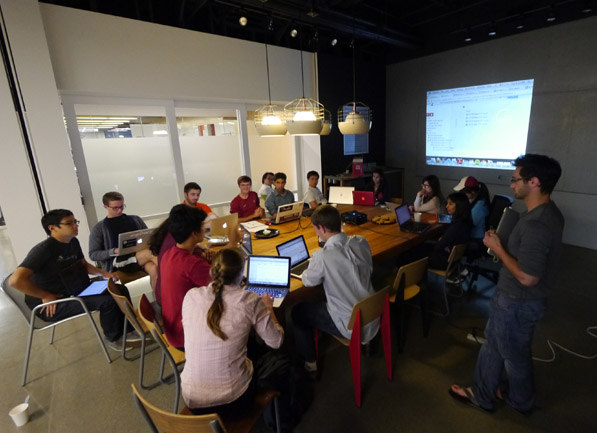 If StartX functioned like most other incubators, running a for-profit fund that invested in each startup, it could probably have raised more money, and sooner, Teitelman says. However, by structuring itself as a nonprofit, and by not taking any equity, he says StartX can focus exclusively on “what’s best for the founder,” rather than worrying about making a return on investment. He says that focus, beyond being important in and of itself, is also crucial to StartX’s relationship with Stanford. (StartX was formerly part of Stanford Student Enterprises and is now an independent non-profit organization.)

I met with Teitelman and other StartX managers earlier this week at the AOL Palo Alto office, where they gave me an overview of their operations. (Teitelman says StartX rents the space from AOL for a nominal fee, and TechCrunch’s corporate masters have provided mentors and other resources.) Teitelman notes that with all the accelerators and incubators popping up, many of them seem to limit themselves to, “Here’s some office hours, here’s a demo day.” StartX, on the other hand, is on “the complete opposite end of the spectrum,” with lots of hands-on mentorship and training.

StartX is a startup itself, which means that it’s constantly learning and evolving based on feedback — as COO Jeff Mounzer puts it, it’s a “meta-learning environment.” To make sure that knowledge is saved and passed on to new team members, everything is obsessively documented in something called the “StartX Manual, A Guide to StartX Operations”. (You can see a little bit of the manual in the photo below.) For example, if a new staffer joins and has to organize the next demo day, the manual includes detailed instructions and a timetable on how to put a demo day together, as well as copies of all the documents that were used.

That documentation apparently impressed the Kauffman folks (by the way, Teitelman says this is the first time the foundation has funded a student-run accelerator), and it’s going to come in handy when it comes to StartX’s other big plan for the money — national expansion. Teitelman says  more details on that expansion will come later this year, but the idea is to work with universities and other organizations, providing them with a “blueprint” so that they can try to replicate the StartX model. 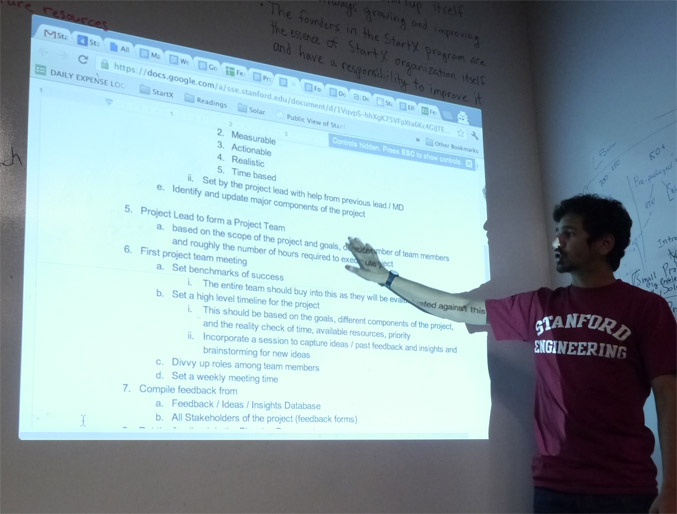