Strangely enough, what Roamz found was that users weren’t necessarily looking for brand new experiences every time they stepped out of the house. Instead, they knew what they wanted — kind of — and were just looking for some guidance and some idea of what other people like. So if a user wanted some coffee, they wanted to be shown the best nearby coffee shops, not necessarily where someone got ice cream a few hours ago. (Check out founder Jonathan Barouch’s post Serendipity Isn’t A Use Case for more on this.) 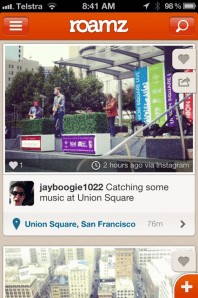 Users can still use more of the serendipitous features of the Roamz app, especially in crowded areas, but it’s no longer the focus of the app. The new app allows users to select from various different categories of recommendations for things happening nearby. So you want coffee? Boom! Click on the coffee tile and it shows you coffee nearby. You want ice cream? You can check that out too. Click on the tile! Either way, the app will feed in social conversations that are relevant to you and in your neighborhood.

The app now allows you to change your location, so if you’re currently in SOMA (like I am), but headed to the Lower Haight later (like I will be), you can prepare for that with new lists of locations and activities. And you can bookmark certain locations so that you can get a notification the next time you’re around a certain restaurant or bar or venue.

The new Roamz app also simplifies the login process. It used to be that you’d have to connect with Facebook just to get into the app and use it. Well, Roamz got rid of that and now anyone can download and start using the app without pulling in social data from the network.
* Just don’t say “SoLoMo” in front of Anthony Ha.