As surely as the seasons turn and the sun races across the sky, Bag Week is upon us once again. Last year I took a risk by taking a white Ogio backpack for a spin (surprise: it still looks pretty good!), and this time around I decided to step out of my comfort zone again with the comparatively tiny HEX Fleet Messenger bag ($79.99).

There’s such a thing as being over-designed, and iPad cubby aside, the canvas Fleet bag definitely isn’t. It’s simple and squarish, and the version I spent time with was clad in fetching dark-and-light gray stripes. In an effort to mix things up a bit, HEX threw in some brown faux-leather on the zipper and around the bag’s edges, and a simple, adjustable black strap rounds out the package. 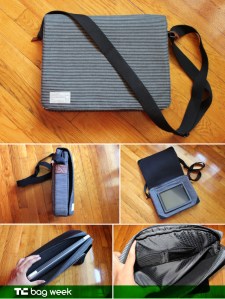 Opening up the velcro-fastened flap reveals something a bit unusual — instead of say, providing a pocket for an iPad (or a similarly svelte tablet), there’s a fabric-lined slot with a big hole it in allowing people to fiddle with their tablets while they’re ensconced in a nifty fabric frame. It’s a peculiar (and sort of cool) touch, but it requires owners to carefully peel those tabs out of whatever protective doodad they’re already wearing — kind of a hassle, if you ask me.

Now we come to the bag’s one major caveat — this little guy is wonderful if all you plan to tote around is a 15-inch laptop and an iPad, but the situation gets dicey quickly if you plan to pack some accessories (or, god forbid, a hardcover book).

The laptop compartment is lined with micro-fleece to reduce the chances of scratches and scuffs appearing on your precious portable, but it’s a pretty tight squeeze — I had to pop the tiny Logitech unifying receiver out of my 15-inch MacBook Pro’s USB port before it would go in all the way. There’s a bit of extra space in front of that main compartment that’s just large enough to contain a MacBook Pro charger a few other small doodads, but this is the sort of bag that forces you to pack wisely.

On the upside, lugging the thing around is pretty dang comfortable. There’s a tendency for unadorned messenger bag straps to dig into my shoulders, but that never happened here. Weight never manages to be an issue, probably because there’s only so much stuff you can squeeze into the bag at any one time.

Now, all that said, I don’t dislike this thing. Far from it — it’s comfy, easy on the eyes in a minimal sort of way, and the front-facing PadPort is a nice touch. I’ll admit to having some packrat-ish tendencies, though not everyone is going to need a bag that’s capable of storing tools for every contingency. Road warriors would do well to steer clear of this thing, but folks looking for a svelte, unobtrusive laptop bag will find a solid companion in the HEX Fleet Messenger.

Bag Week is our yearly celebration of laptop bags. Being that they are, for the most part, quite boring, we don’t find it odd that most folks settle for janky bags they get free with their laptops. Therefore we’ve created Bag Week, a service for you proud men and women of the laptop carrying world. We’ll be talking about a panoply of travel and back-to-school sacks and if you have a favorite you’d like featured, drop us a line at tips@beta.techcrunch.com with the subject line BAG WEEK. You can read all of our bag week coverage here