When Twitter published its latest thinking on how its API would evolve, and what it wanted to leave behind, it noted one of the areas it wanted to emphasize more was enterprise. Today we get more of a clue why: HootSuite, an enterprise-focused Twitter client that actually got a name-check in that blog post, is teaming up with Twitter to sell advertising on the social network.

A promotion that went live today will see some 30,000 HootSuite Pro premium clients receive $100 in vouchers for ads on Twitter, with the offer redeemable through the HootSuite dashboard. The move is aimed at the many small/medium businesses rather than larger enterprises that use HootSuite, and comes in the wake of several other efforts Twitter has made to target smaller companies for ads.

As spokesperson from Twitter confirms that this is an initial rollout.

“As with all of our advertising efforts, we are being thoughtful and deliberate in how we roll out self-serve to all kinds of small and local businesses,” she said. “We are testing out various ways to roll out this offering, including offers to Twitter users by companies like HootSuite.” TechCrunch understands from a source that this is the first signal that “a deeper partnership between the two may be in the works.”

HootSuite has published a help page with more detail on the promo for those who get the $100 voucher invite. A spokesperson from the Vancouver-based company had this to tell us:

“Real-time conversations are happening on Twitter, and we are excited to enable our users to drive even greater engagement on Twitter with Twitter advertising. We are currently conducting a trial with the Twitter team to gauge the appetite for Twitter advertising with a small sample of our userbase. As our users are some of the most influential and prolific social media practitioners on the planet, sending north of 2 million messages per day on behalf of SME brands, this trial will help us set roadmap to better service them.”

Twitter first kicked off its self-serve ad platform with a promotion with American Express in February. It followed that up with a competition in June in the UK among businesses tweeting their best Twitter business stories. The best stories will land the business in question a voucher for £1,000 ($1,500) to spend on ads.

There this advertising promotion and Twitter’s endorsement of HootSuite last week at the same time that it was distancing itself from other developers who create more consumer-focused clients.

But there is also the fact that Twitter is one of the primary outlets for HootSuite’s 3.5 million+ social media dashboard users (others networks that work with HootSuite include Google, LinkedIn and Facebook).

In May, when we heard that HootSuite was talking to investors about a possible $50 million round, Twitter was one of the names mentioned there, too.

Twitter, as it builds out its business, is looking to brands and other businesses for advertising and marketing on its social network. And although Twitter does not offer paid, business-class networking services today, existing enterprise relationships could prove to be useful if it ever chooses to move into that area.

Facebook has also been tweaking how it presents self-serve advertising tools for small businesses. 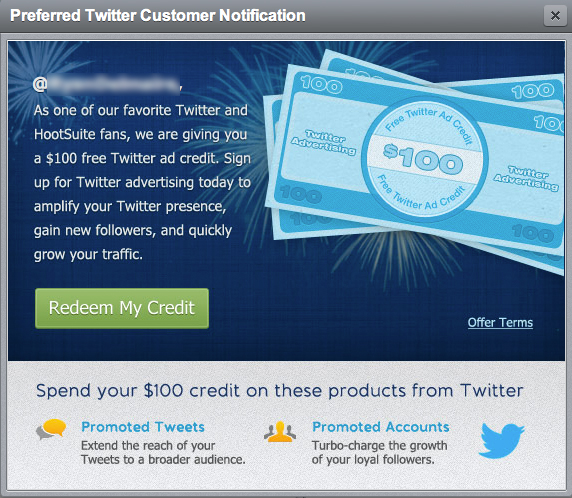