When I first demoed the Glassmap app about six months ago, it was a pretty standard way to keep track of where your friends were. Like Apple’s Find My Friends, but better. The key differentiator then was that Glassmap uses a proprietary, patent-pending technology called “Relay” that let you keep tabs on your friends in real-time without burning through phone’s battery, providing 10x the battery life compared to other real-time location apps.

Well, Glassmap still uses Relay, but it’s added a lot of new social features that go beyond just seeing where your friends are on a map at any given time. For one thing, it’s added Facebook, Instagram, and Twitter integration, so that users can share what they’re doing to those networks. More importantly, however, it can now surface photos and other information to provide information about events and other things happening near you. 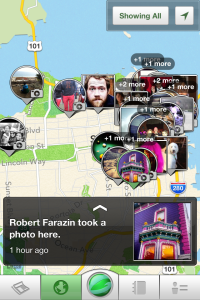 The new app is built on Glassmap’s relevancy engine — codenamed Cerberus — which uses more than 300 million location data points that it’s collected over the last six months to determine what photos or other information it should share with users. With that, users will be introduced to interesting people, photos, and events happening around a user and where he tends to hang out. Cerberus taps into location history, time of day, and previous mutual interactions to determine which content is best to share with users. So for instance, when I’ve tested out the app, I’m generally only show content from users in SOMA (where I work), Western Addition (where I live), and the Lower Haight and Mission (where I hang out).*

In addition to surfacing content from other services, it’s added features that could entice its users to share more from its app. That includes a group of nine photo filters for gussying up pictures taken within the app, and the ability to sync comments and likes between Glassmap and other networks. It also includes free in-app messaging to any user, and the ability to “star” other users you’re connected to that you want to see your real-time location.

Glassmap was co-founded by Stanford computer science alums Geoffrey Woo, Jon Zhang, and Jonathan Chang, and is based in Mountain View, Calif. The team, which was part of last year’s summer Y Combinator class, now has four full-time employees and 10 part-timers.