In recent years, it’s become so that people online can find reliable information from vetted individuals on well-designed websites that specialize in a lot of topics. Want to know what it’s like to be an employee at Zynga during its recent stock price slide? Quora has your back. Want to know about the legal process for getting a green card? Check Avvo. Advice on how to launch a startup to the press? Take a look at Branch.

But when it comes to advice and support for people who are diagnosed with chronic medical conditions, things aren’t so easy. The main places where people share tips, treatment experiences, and support are relegated to the kinds of answers websites and web forums that seem stuck in the 1990s and early aughts.

Healthy Labs, a new startup incubated in the current batch of Y Combinator startups, wants to fill that gap and be the go-to place for people living with chronic medical conditions. Co-founded by Sean Ahrens and Will Cole, who met while they were each studying computer science at the University of California at Berkeley, Healthy Labs has made its initial debut this month with the beta release of Crohnology — essentially, a social network for people dealing with Crohn’s Disease and Colitis.

It is a niche play, but it’s a big one: Crohn’s and Colitis themselves afflict 1.5 million people in the United States alone, and some 5 million people worldwide. And the nature of these kinds of issues is that their effects are very personal, as are responses to treatment — what works for one person may not work for another. So traditional medicine has not come up “cures” for these afflictions. But there is a big element of collective sharing, comparing, and contrasting that can occur especially well online that can help individuals discover what treatment and maintenance regimens may work for them. 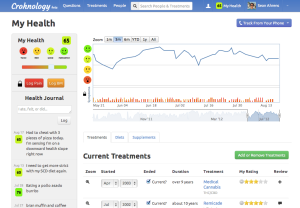 One key thing about Healthy Labs and Crohnology is that it’s building patient-only networks — people have to be verified as actually being diagnosed with the relevant issues before they can join. This is meant to keep out people shilling for pharmaceuticals and certain holistic “cures,” and keep the community centered around the real folks who are dealing with chronic diseases at hand.

Crohnology lets people monitor their individual progress privately with analytics tools accessible only to them, and reveal more general updates about how they responded to treatments through their more widely viewable site profiles. But, since privacy is key when sharing about medical conditions, nothing on Healthy Labs’ sites is indexed in search engines or viewable to those who do not have verified accounts.

At the moment, Healthy Labs is running Crohnology only, and its team is comprised of just three people: Ahrens (who was diagnosed with Crohn’s at the age of 12), Cole, and another developer named Sarah Branon. But the response to Crohnology alone has been significant: Some 1,400 members have joined the site in the week or so since its launched in beta to the public, and Cole tells me that the feedback they’ve received has been incredibly encouraging.

The next vertical they hope to launch is one dealing with auto-immune conditions such as Multiple Sclerosis and Cystic Fibrosis.

The possible revenue generation options here are clear — the pharmaceutical industry is no slouch when it comes to making money — but Healthy Labs co-founder Will Cole tells me that they are going to be very careful when it comes thinking about monetization. There could be an opportunity for Healthy Labs to serve as an intermediary between companies that want to perform targeted clinical trials on new drugs and people willing to participate in those trials, Cole acknowledged — but the key there is that it would be a totally opt-in system that would benefit the site’s users just as much as, if not more than, the pharmaceutical companies.

All in all, as a very freshly-launched startup, the company is a ways out from thinking about revenue generation. But it does seem to be onto a very earnest cause, with a big target market, in a potentially lucrative space. Healthy Labs will certainly be one to watch in the months ahead.