The Samsung Galaxy Note 10.1 is one of the more exciting tablets to be released in a while. In fact, it may even pose a small threat to the iPad, considering its top-notch specs and Ice Cream Sandwich-flavored operating system. But beauty is only skin deep, and it’s what’s on the inside that counts, right? So let’s not judge this book by its cover:

iFixit, the team that loves to tear our favorite gadgetry apart, has just conducted its teardown of the Galaxy Note 10.1, finding that it’s one of the more easily repairable tablets they’ve encountered in a long while. It scored an 8.1 for repairability, whereas the new iPad only scored 2 out of 10 points on iFixit’s scale.

The team found that almost every internal component of the Galaxy Note 10.1 is individually replaceable. Even the chintzy glass over the LCD is easy to remove and replace. However, iFixit isn’t all that impressed with the 7,000mAh battery used to keep the Note’s profile as thin as it is.

We were pretty impressed with the Galaxy Note 10.1 and its cute little S Pen, but at the same price point as the iPad, is a good repairability score enough to tempt consumers away from Apple’s undisputed champion of tablets? Time shall tell, my friends. 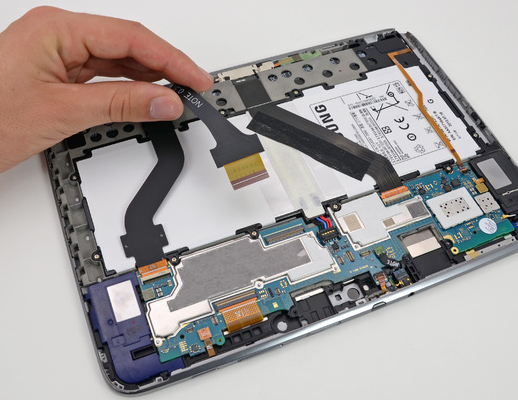