CapLinked, a startup offering private workspaces for managing financial deals (such as startup funding), has occasionally been described as a competitor to AngelList. Today, however, it’s announcing a new feature — the ability to share links pointing to CapLinked workspaces — that makes it easier for companies to use the two services together.

The linking feature wasn’t built solely to integrate with AngelList — co-founder and CEO Eric Jackson notes that the links can be shared anywhere, like in an email or over Skype. But AngelList is definitely a big part of the pitch, and it’s an area where the links seem like they’ll be particularly useful.

Basically, you can think of this as the CapLinked version of Dropbox’s feature allowing users to share documents by just sharing a link. What’s actually being shared is different, but both features are trying to remove many of the barriers to sharing. In the case of CapLinked, companies can now post the link in the “investors only” section of their AngelList profile, then investors interested in a deal can click on it to view the documents they need to begin their due diligence. The company, meanwhile, gets to see who’s viewing which documents, and they can update everyone in the workspace whenever a new document is shared.

Previously, companies invited investors to their workspaces by logging into CapLinked and entering the investor’s name and email address. On its own, it doesn’t sound like an enormously onerous process, but Jackson points out that it’s really designed for situations where you already know the investor: “What we realized was that in some circumstances, you want to be able to invite potential investors that you don’t know yet,” he says. By posting a link to AngelList, CapLinked users can get the initial steps of the dealmaking process started with any interested investors.

The link isn’t really meant to be shared with the general public. It’s probably not a great idea to just put it up on your website. Instead, it’s best for semi-private situations like an email or the investor-only section of an AngelList profile. But in case the link is shared inappropriately, even after someone clicks on it, they still need to get approval from the company controlling the workspace in order to see the documents.

Jackson also says that CapLinked isn’t just for startups — it’s used by other companies to manage business transactions online, too. He adds that he sees the incumbent virtual data room services like Intralinks and Merrill Datasite as his competition, not AngelList.

“[AngelList] is an awesome site for connecting investors and startups,” he says. “Our site is much more about managing a transaction and handling documents that are very sensitive and confidential. They’re really kind of complementary, because where AngelList leaves off, CapLinked picks up.” 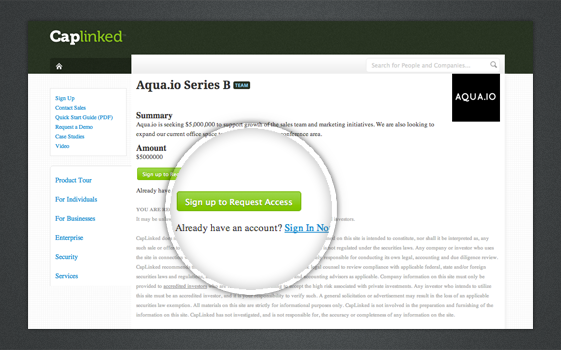