This is probably not the Google+ API you have been waiting for, but Google just announced the launch of version 1.2 of its Hangouts API, which comes with a number of significant new features for developers who are building products on top of Google’s group video chat service. In addition, Google also just launched private messages in Hangouts as an experimental feature.

Among other things, the updated API now gives developer more control over which guests in On Air hangouts appear during a video broadcast. Google itself uses this feature for its Hangouts On Air Cameraman app. The updated API now also provides developers with more information about a hangout, including the topic, preferred locale and the YouTube ID for the recorded video. 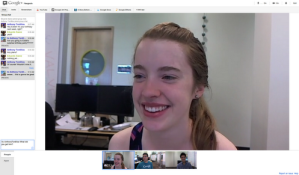 Other new features include the ability to add sound to a participant’s audio stream. Google says this could be used to add a laugh track, applause, music or a sound notification to a video stream.

There are a number of smaller changes as well and you can find a more detailed rundown of all the changes here.

As for the experimental private messages in Hangouts, which were developed by Google Interns Mairin Chesney and Anthony Tordillos, the feature pretty much works as you would expect it to. To send a private message, you just type ““/to [their name] [your message]” to get started. Tordillos also notes that “you don’t need to type their full name, just enough so that it’s not ambiguous who you mean. Type “/users” to see the nicknames you can use for each person in the Hangout.” This feature should start rolling out in the next few hours.

Google, of course, still remains hesitant to roll out a full read/write Google+ API. Given Twitter’s recent changes to its API, now would probably be a good time for Google to start giving developers more opportunities to develop on top of its social platform, but given the recent public statements by the Google+ team, chances are that isn’t going to happen anytime soon.