Deets is a newly launched mobile app that lets you organize your contacts and keep everyone’s information up-to-date automatically, but that description alone sells it a bit short. This new iOS app is a little bit of everything – it’s a communication hub, a contact synchronization utility and even social networking service. The idea is somewhat similar to the concept of Google+ Circles in the sense that it allows you more control over what info you share and who you share with, but it does so by having you create different personal profiles for each group of contacts. Your “family” group might get your home address and cell number, for example, while your “client” group only sees the office address and phone.

In addition to contact sharing, Deets will also allow users to share photos, files, and calendar appointments with each other, too.

The company was founded by Linda Miller and Luke Scott, who spun the idea out of an earlier startup called StyleCard. Online sometime just before the iPhone’s launch, StyleCard was something like today’s Moo.com as it allowed users to order customized business cards online. What they saw, however, was that customers were ordering different sets of cards for their different “identities,” so to speak. They would order professional cards for work, others for friends, etc. Some would order as many as four different sets for their various “profiles.”

Miller, whose experience at startups dates back to the dotcom days when she was employee #20 at Priceline.com and later led the development of Hotwire’s hotel product before leaving back in 2005, has been thinking about profiles and identity for a long time. After leaving Hotwire, she didn’t have a business card anymore, and she said it was like she lost her identity as well. This inspired her to start StyleCard originally, but after the iPhone came out, she realized that she could more. “We said, let’s regroup, let’s do it digitally, and do it mobiley.” 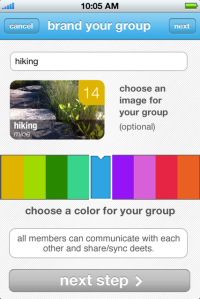 She and StyleCard co-founder Scott started Deets back in late 2009. Built on top of AWS, the company spent a lot of time on making the product scalable while protecting user privacy and managing the security of the data it touches. But to users, the biggest distinction between Deets and some other contact organizers is that everyone’s contact information is updated automatically, once shared with groups. There’s also a big play for the enterprise market here, where teams could share documents (currently via Dropbox only), meeting details and photos privately with each other.

On the social front, it’s more like a Everyme, Circle, or – yep – it even resembles Google+. “We did this before Google+ came out and we were like, ‘are you kidding me?’,” laughs Miller, “‘that’s what we want to do!’ We were busy working on the technology and had to stay really relevant to keep up with the space, because the space it definitely heating up.” She says that Deets’ focus on privacy, mobile communication and synchronization are what make it stand out from the crowd. And the Deets homescreen dashboard (see top screenshot) is handy for seeing at-a-glance, which groups have new updates.

The Deets business model is different from many social networks – instead of advertising or mining customer data, the service will eventually go the SaaS route by charging for premium features. 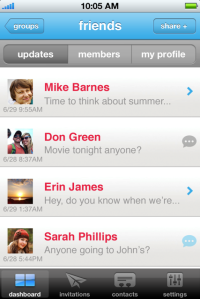 While the concept itself is solid enough, the implementation may need a little tweaking. For starters, there’s the cold start problem – although it can pull in your iOS address book, no one’s contact info will automatically update unless they, too, join Deets. Other apps in the space, like Everyme, are smart enough to create groups for you on the fly automatically, while Deets has you manually picking contacts and sending out invites. Even creating your own profile info is a pain because you can’t just point to your contact card in the iOS address book to import your data before adding or removing the pieces you want to share or hide. For these reasons and others, Deets feels more like an app that would make the most sense for small teams in work environments, than it does for the mainstream “friends and family” market it’s trying to target.

As it goes to launch, Deets is free as its subscription pricing is still being worked out. The Android version is expected by January, but the web and mobile web version are available now. Deets has $1.5 million in funding, $500,000 of which comes from Connecticut Innovations, and the rest from angel investors. Deets has its tech team in Connecticut, but COO Art Goldberg is based in Silicon Valley.