MicroEval, a startup in the current class of startups incubated by Y Combinator, is taking a new approach to the often painful process of employee performance reviews. The basic idea: Instead of having a single review every six or 12 months, break it up into quick bits of feedback that can be collected every week or so.

Co-founder Ryan Jackson says the idea came, in part, from a friend of the founding team, who went in to a performance review and was criticized for things like coming in to work at 10 instead of 9, and focusing too much on their laptop during meetings — in other words, feedback that really shouldn’t have waited six months.

Is that really a technological problem? Doesn’t it just suggest that some bosses need better communication skills? Jackson says that the issue is, in part, generational — that the old way may have made sense in the past, but technology has conditioned younger workers to expect “more frequent feedback.” By moving a largely paper-based process online, MicroEval makes it easier for supervisors to deliver feedback at that pace.

Jackson says the team’s goal is to offer evaluations that can be completed in less than a minute. They should consist of just a few questions, where supervisors hit a button to rate things like your productivity, your teamwork, or whatever is most important to them, and offering additional comments as needed. As an example, Jackson created a form that allowed me to rate his interview skills — there were three questions, and it took about 30 seconds to fill out. (You’re doing just fine, Ryan.) 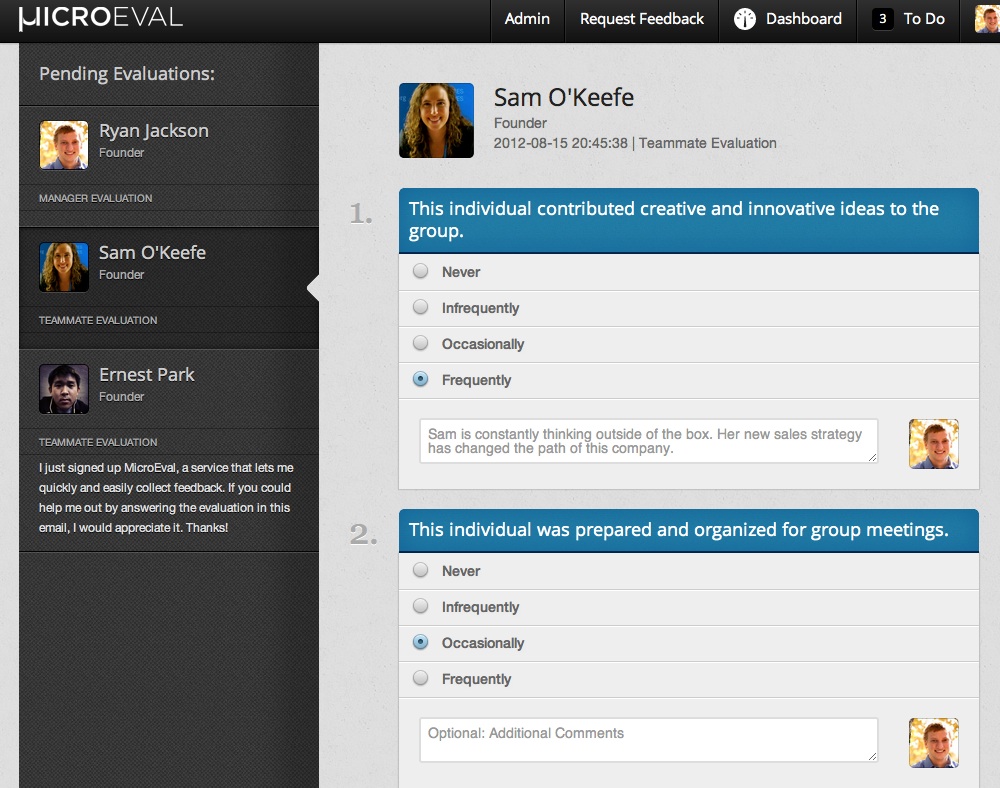 MicroEval offers some “pro templates” as samples for customers, but Jackson says the service is entirely customizable, since most companies want to create their own evaluations based on their needs and cultures. Companies can also customize the frequency of the evaluations — for some teams, it might make sense to fill out evaluations every week, for others, it’s more like every month.

Companies can also upload their org charts to MicroEval, so that all the relevant folks get regular evaluation requests. And if someone thinks they need more feedback from their boss, they can request an evaluation, too.

This probably won’t eliminate the need for those big, annual or semi-annual evaluations, Jackson admits — especially since that’s usually when people get raises. But MicroEval should make them a little less stressful for both sides. There should be less surprises for the person being evaluated, because they’ve been getting feedback the whole time. And a supervisor, meanwhile, doesn’t have to start an evaluation from scratch, and can instead draw on all the data that’s already in the system.

Jackson adds that over time, he wants to make it easier to “integrate all forms of feedback.” For example, if you give a killer presentation, your supervisor shouldn’t have to wait until the weekly evaluation to point that out — they should be able to log into MicroEval at that moment and note that your presentation was awesome.