How’s the market for online video ads holding up through the first half of the year? Pretty well, considering that inventory continues to grow at a rapid pace. Research from real-time media buying company TubeMogul shows CPMs rising at an average rate of 2.5 percent per month. But many media buyers aren’t taking advantage of the huge value that comes from placing ads on the weekend.

For top-tier publishers, average CPMs were at $9.93 at the close of the first half, and hit $10.19 in July, with pretty consistent growth all year. Interestingly, all that growth occurred despite the fact that inventory is edging up at a rate of 4.7 percent a month during the first half of the year. Usually, an increase in inventory depresses unit pricing — you know, the whole supply-and-demand thing.

The data comes from real-time media buying startup TubeMogul, which launched its ad platform in the spring of 2011 and prides itself on being all sorts of transparent. Data is aggregated from across multiple public and private video ad exchanges, but doesn’t include any sort of fees paid to TubeMogul or the exchanges. That means it’s not tapping into inventory sold through direct sales channels — merely stuff that’s bought on the fly, in real-time. 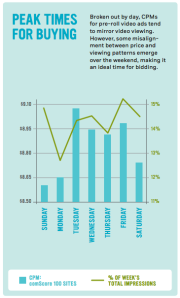 Speaking of… Another interesting finding from the TubeMogul report: Weekend is the best time to buy video ads, as viewers are tuning in but prices remain well below average, compared to the rest of the week. (Check out the chart to see this in action.) TubeMogul comms director David Burch theorizes this is because media buyers aren’t at their trading desks over the weekend, which totally makes sense, since this is all about real-time buying. But still, you’d think there would be one or two nerds in the class who would be more concerned with making a buck than going to the beach or having a day off.

And yet another interesting data point: The size of your ad is a pretty good proxy for whether or not a viewer decides to watch it. According to TubeMogul data, larger video players saw a 96.2 percent completion rate on video ads for larger video players –those bigger than 1,000 pixels — compared to 80.1 percent for smaller players, for the same 30-second pre-roll ad. So if you’re an advertiser who cares about performance, make sure your ads don’t play in tiny little video windows off to the side somewhere — demand a full-screen takeover and your audience will care more.

That said, there was no real discernible difference in the performance of a publisher based upon its comScore rank for performance-based advertising. If anything, ads that ran on lower-quality sites had a better click-through rate than others. Same goes for completion rate — Burch says it’s “all over the place.”

So what have we learned? Video ads aren’t as cheap as they used to be. Wanna buy some? Make your video ads big. Oh, and run them on weekends. And if you’re going for clickthroughs, don’t sweat it so much if you don’t get some comScore Top 100 site. Someone might accidentally click through anyway.