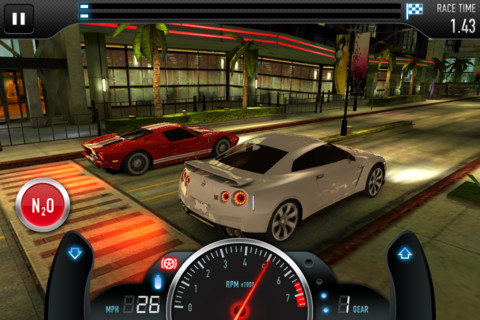 As the iOS platform has gradually amassed more than 365 million units in cumulative device sales, it has created a rising tide for all mobile app developers, who have seen increasing monthly revenue run-rates with each year.

Now comes a new high point from Benchmark Capital-backed NaturalMotion, which said its highly hyped title CSR Racing passed $12 million in monthly revenue. That’s a big jump up from previously reported high water marks like the roughly $5 million or so Infinity Blade apparently pulled in during the very lucrative holiday month of December. The game had quite a bit of an advantage though as it was featured during an Apple keynote at the last Worldwide Developers Conference — an extremely rare feat for a game developer.

CSR Racing is, as it eponymously suggests, a drag racing title. There are partnerships with Ford, Mini and so on to provide customized cars. The game monetizes through in-app purchases where players can spend either earned or paid currency they buy in the game.

“We tried to monetize many parts of the game, but not too aggressively,” said chief executive Torsten Reil. “We think this is a more sustainable and defensible approach that’s ended up working.”

Boss Alien, the Brighton, U.K.-based development shop that worked on CSR Racing, is also joining NaturalMotion through an acquisition. The terms of the deal weren’t disclosed.

NaturalMotion was started more than a decade ago and specializes in doing realistic 3D animation of human bodies. Its technology has been licensed out to studios like Rockstar Games, which used it in Grand Theft Auto 4 and movies like Troy, which starred Brad Pitt.

The company initially raised funding from Balderton Capital, but just tacked on an additional $11 million in funding from Benchmark Capital. That round put gaming veteran Mitch Lasky, who sold JAMDAT to EA more than five years ago, on the company’s board.

The company’s previous big hit before CSR Racing was an uber-realistic animal care-taking game called My Horse. The company differentiates itself from other freemium developers with very photo-realistic 3D animation, instead of 2D art that resembles titles from the social gaming world.

“What’s happening overall is that Wave One of mobile-social games is coming to an end,” Reil sad. “Two-dimensional resource management games, like clickfests, are fading.”

The company is working on six games simultaneously at the moment and is up to 160 people with offices in the U.K. and the U.S.