Playing in the same general space as 500 Startups-backed Love With Food, but going the traditional e-commerce route instead of the “box of the month” club, new San Francisco-based startup Delicious Karma is officially launching its own artisanal and gourmet food shopping site today. The site currently features over 500 different products from nearly 100 different artisanal food companies and has already signed up 2,000 customers during its private beta. The big idea? Offering artisanal food vendors a better, more efficient way to get their products in front of customers, so they can go back to making their fancy cheeses.

The service will be dabbling with a mix of different approaches to entice customers to the site. For starters, members are introduced to foods through special three-day sales where they’ll be able to buy at discounted prices before the items are moved into inventory. Customers who purchase through more traditional means will be incentivized to return to the site through marketing initiatives that will include both email and social efforts. (Shoppers today can already collect their favorites on Pinterest-like “Crave” boards.) And soon, the company will also offer “sample box” subscriptions containing a half dozen or so items, so shoppers can learn what foods they like and want to buy again.

Nope, you can’t entirely avoid the box-of-the-month model these days, it seems. 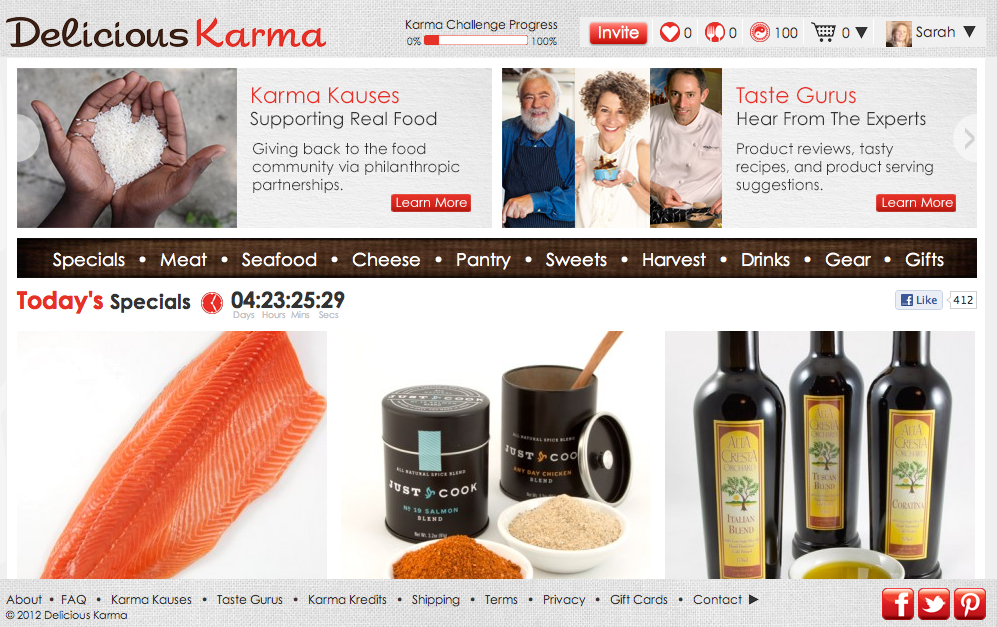 Delicious Karma isn’t working off an affiliate model for revenue generation, but is instead buying foods wholesale or discounted from wholesale. The team developed its own backend infrastructure that automates the ordering process. Vendors have their own unique portal where they can log in, run reports, print out shipping labels, and set up deliveries using Delicious Karma’s shipping carriers.

Founded by Jim Ritchie, whose background is in engineering, and wife Michelle, who most recently held an executive role at Jamba Juice, Delicious Karma isn’t only about selling its tasty treats, it also wants to give back to the artisanal community. Ritchie says that 1% of the company’s time, equity and profits will be returned to its partners through something called “Karma Kauses.” The “Kauses” are actually organizations that promote and support this community. Currently, the site lists San Francisco-based non-profit incubator kitchen La Cocina and non-profit Seedling Projects as its first “Karma Kauses.” Soon, customers will also be able to donate their own Karma Kredits (points awarded for participation) to the Kause of their choice too, in order to have Delicious Karma donate cash on customers’ behalf. Those Kredits can also be applied to on-site purchases (10 Kredits = $1.00).

The beta has only been open for a matter of weeks, so numbers regarding transactions or orders per day don’t make sense right now. Jim did say they were seeing multiple orders per day, however. Until now, the five-person startup has been self-funded, but Jim, a 20 year Silicon Valley resident, is now planning to use his connections in the industry to help raise a seed round of around $1.5 million to $2 million to grow the site further.