Wee Society, a new effort emerging from a small design and branding studio based in San Francisco, has just published its first app, a children’s interactive book called Wee A B See. And it’s the first of many products – not just apps – which this new company plans to produce.

Now, you may not have heard of Office, as the studio is called, but you probably have come across their work. It’s the team that brought you that new, simplified Google Chrome icon, for example, they also developed the Disney’s Store’s identity and brand, designed eBay’s corporate site and shipping boxes, built the brand identity for the now Facebook-owned Karma gifting app, and they’ve done work for some of the world’s biggest brands, including Apple, Coca-Cola, P&G, Nike, Hasbro and others. They’re even doing a little something for Facebook now which they can’t talk about.

With the kids’ iPad app Wee A B See, it was an idea which simmered for years as a side project, inspired by the desire from many on the Office team, parents themselves, to have attractive, well-designed, fun and educational experiences for their own children. But client work always took first priority, which delayed their ability to focus on Wee Society apps, of which Wee A B See is the first. 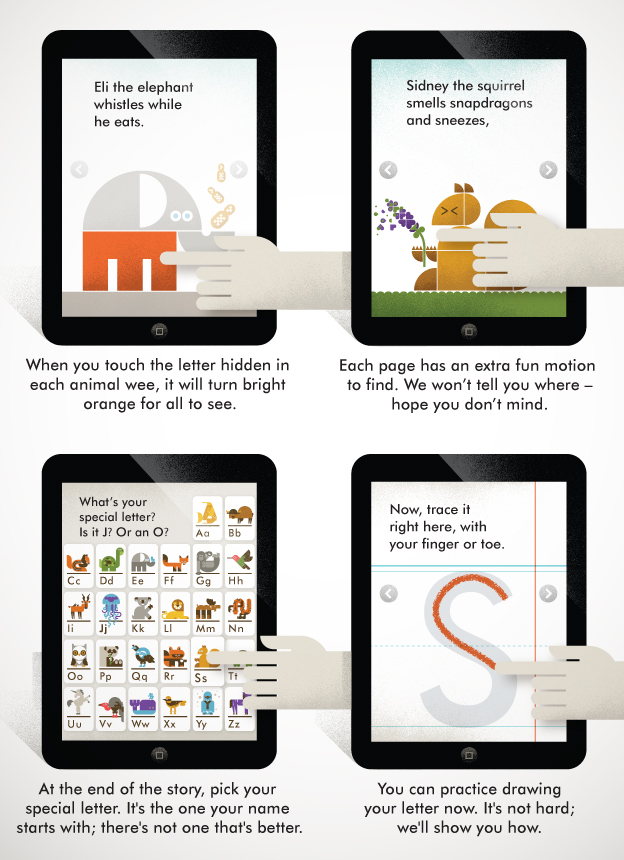 “It’s fun being our own client – well, the good and the bad. The bad is that we don’t prioritize it. We haven’t had hard, hard deadlines,” Emily Bolls, an account director at Office tells me. “Now that we’re actually at the time of launch, it’s been super exciting. It’s been amazing – the response so far to the app has been great,” she adds. “We had no idea what to expect going into it.”

Wee A B See itself is an adorable interactive book that uses animals, sounds, and letter drawing practice to teach preschoolers the ABC’s. It’s reminiscent of the Interactive Alphabet app, if you had to pin it down. But the app is not the only plan Wee Society has for the cast of characters they’ve invented here. The team is also going to sell prints and posters on their website (which is still under wraps here), and maybe even expand into other wall hangings and books. The posters will range from affordable  ($45) to expensive ($250), and some will be able to be personalized with the child’s name for $85.

You don’t often see app publishers taking this unique approach where the app is only a part of their brand from the get-go, but for a branding firm like this, the strategy makes sense. “We definitely see ourselves as a lifestyle brand, not a digital media company,” says Bolls. “Most out there doing a lot of the best educational apps are educational media companies. So yes, it is different.”

But Wee Society isn’t just being different to stand out – there’s another big reason for this approach, says Bolls. “The business model is not there for apps which is why we’re doing other products as well…it’s a tough way to go – self-funding and then selling an app for $2.99, and expecting to make any money, so we’re being realistic about that.” (Ouch, say all the bootstrapping app startups out there in response.)

The iPad Wee A B See app is available for download here in iTunes for $2.99. Wee Society is now in the early stages of building its next children’s app, which will be aimed at slightly older kids.